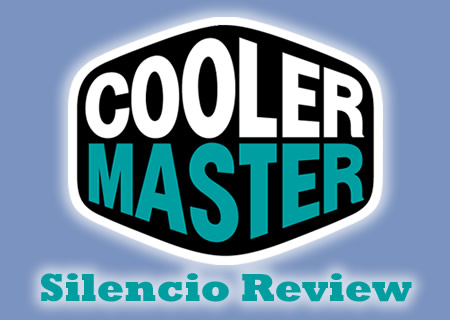 The midtower cases that have plenty of hard drive bays and aim to be silent are plentiful at this moment in time. Not all of them are actually any good though! It's always nice to see another manufacturer bringing a new chassis to the table and this time it's the turn of Cooler Master with the Silencio 550. Photos of the Silencio have been floating around the tinterweb for some time now and we have even had our sample for a little while but today is its official release.

So the Silencio 550 is aimed at a very tough segment of the market, but comes in slightly cheaper than its competitors at around £67. Let's move on to the video review and see how well it fares when given the OC3D chassis review treatment.

So Cooler Master have a new chassis, it really doesn't seem very new to us here as the case has been with us for weeks now, thanks to this extra time we had before the NDA release it has given many of us in the OC3D office a chance to have a play and pass our own judgement. We were all in agreement that its nice to see a manufacturer trying to fight its way in to this arena with a cheaper chassis that does not have a cheap feeling build quality. To be frank if it did come out feeling cheap then it would be one of the few, if not the first, Cooler Master chassis I've ever used that did.

It may not feel cheap but we did feel it was lacking a few features. Considering there is no roof fan we think that there should be some more sound deadening material in the roof to help with the silence that little bit more. Another thing we felt was an over sight was the hard drive dock in the front had no cover at all. Admittedly the door will keep this hidden but we think a basic cover would have been nice for when the dock is not in use or even to hide the drive inside. The cable routing holes were also limited around the actual motherboard tray but this by no means meant the case was untidy, and due to the size of the cut outs we can understand why they have not used any grommets although we cant help but miss them.

The sound deadening material on the doors does its job very well and has a thick quality feel to it. The thickness however creates its own problems in that large heat sinks may touch the side panel and hinder fitment. The rear door takes this on another step though, and by that I mean that the foam actually makes it difficult to fit the side panel once you have your PSU cables run up the back of the motherboard tray. Once you take into account the foam there is little or no room at the back and can make fitting the side panel difficult even for people like us who build these things allot! Imagine those comedy moments of people trying to get their suitcase closed before going on holiday..... That's what getting the back door on this can be like!

The removable hard drive rack deserves a tip of the cap as it allows up to 400mm of room to slide even the most enormous graphics card into and this is a feature neither the H2 or the R3 had. So if you are looking for a chassis like this for a gaming rig this could be the deal clencher. Add to this the option of 2x 1200mm fans or a single 140mm fan in the front and you should even be able to keep your enormous GPU cool and quiet as well.

We would suggest that this chassis is for ATX or smaller boards though, anything with any extra real estate really wont fit in this and would be a complete pain to try and get round as well.

So to wrap up it's a sleek stealthy looking case with the option of 7 hard drives, large GPU's and all this with a near silent operation as long as you don't plan on fitting it with super hot GPU's and having your CPU running with an enormous overclock! If the case is indeed released at £67 it will be very well placed in the market as well. Although we don't think that this is the best looking of chassis we can see many people will warm to the subtle stealthy looks. Lets face it some of us play games and don't just stare at our rigs for hours on end..... I think?

Taking all these factors (thats fakTORRRRS if you are American <3 the Lemon) in to account we are happy to award the Cooler Master Silencio 550 the OC3D Silver award.

Thank you to Cooler Master for the Silencio 550, you can discuss your thoughts in the OC3D forums.

SieB
This case reminds me of the Cooler Master 330 Elite I used to have and looking at the the top and the sides of the case they look exactly the same (minus the side fan intakes on the 330 elite), I think it could actually be based on the same case and they have just upgraded it.

It's not a bad case but it is around the same price as a CM 690 II ADV and for a few quid extra you can get a Fractal R3. Personally i would go with either the R3 or 690 II because you get better features and imo they are better looking. The Silencio 550 is still worth the money though and with Cooler master you always know that the case is going to be solid and made well.Quote

jonowee
Quote:
My feelings exactly; but I would go so far as to drop it down to Bronze or even no award, because I can't help feel that they raided the Coolermaster parts bin and tacked it onto the newer Elite or original 690.

it looks like the side panels are exactly the same form factor as my CM storm scout. so, if i wanted to make my SS more silent i could buy one of these just for the anti-noise panels, to replace my windowed panel and the rear one.

that front HHD dock will let dust into the system, as fluids (air) will always find the easiest route for flow.

also, if a SD card was inserted - how much overhang (jutting out) would there be?

i must now go and shop for them

integratable
It's a very solid, nice case, but yeah, R3 is a better buy.Quote

sheroo
I quite like that, I think they've gone for maximum silence. Should have had noise dampening material in the top though and the foam on the back panel could have been thinner.

Does that front doc support 2.5" drives? If not it should.

Was it just me, or did that video appear to be quite dark? With it being so plain and black I found it hard to see any of the interior details?Quote
Reply