Around this time last year, Cooler Master released their Cosmos 700P, a case which was more than just a mere Cosmos re-release, redefining the iconic chassis with unparalleled modularity and a boatload of customisation options. In a way, the Cosmos C700P is only limited by the imagination of its user.

For starters, the Cooler Master C700M ships with addressable RGB case lighting, which can be configured to several pre-defined presets or used in conjunction with motherboard ARGB headers to offer full-system lighting synchronisation, something which we were able to achieve using ASUS' Aura Sync software. This case also ships with a PCIe riser card and a graphics card mounting bracket, which supports angled configurations of between 0 and 90 degrees. This allows Cosmos C700M users to mount their graphics card in a sexy 45-degree configuration. 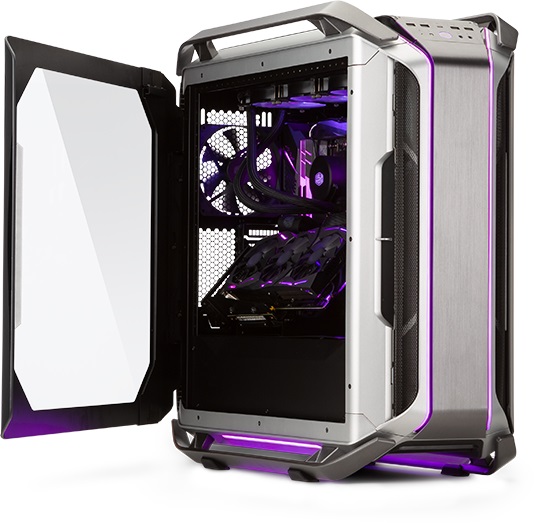 If there is one thing that the C700M screams, its "premium", with the case releasing with a large number of aluminium panels, cast aluminium handles/feet and a variety of internal, steel replacement plates. In many ways, the C700M can be considered as the C700P "all the bells and whistles edition."

At stock, the C700M ships with four 140mm fans and an integrated fan speed controller, though users of this case are likely to replace all of Cooler Master's stock fans with high-end ARGB enabled variants. In total, this case supports up to 9 120/140mm fans, which gives the C700M a lot of airflow/cooling potential.

Water cooling-wise, the Cosmos C700M has support for 360/420mm radiators at the top and front of the chassis, with 420mm radiators requiring users to remove the case's 5.25-inch drive mount. At the bottom of the case, an additional 240 or 140mm radiator is also mountable. Heavy-duty modders will no doubt find ways to add even more cooling potential to this chassis, though that doesn't mean that the case's stock water cooling support is unimpressive.

Wraith
Damn! am I the only one who see's the potential of this chassis, so much wanty wantness!Quote

Greenback
Quote:
No you're not, if I was still into water and big cases I'd seriously consider this but these days I'm more into smaller more manageable casesQuote

Warchild
Quote:
I have the C700P. Was disappointing tbh.Quote

Bartacus
I wonder if you could fit two big rads at once, or will the end tanks bump heads, like they seem to do in EVERY case that offers a top and front rad mount.Quote
Reply