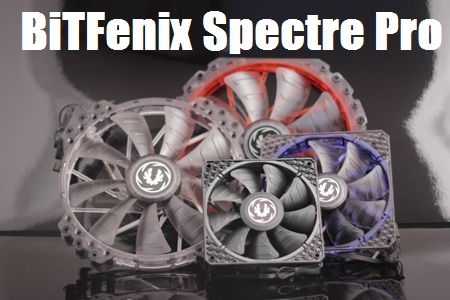 It's acknowledged that the figures used for CFM and other metrics in this review are those supplied by the manufacturers and that as such you may wish to take them with a pinch of salt.  That said, fan manufacturers like other manufacturers do have certain quality standards and units and measures legislation to meet with regards to the claims they make about the abilities of their fans.  If we accept that a given manufacturer may "massage" their figures a little by introducing a fiddle factor, then by definition we must accept that all manufacturers massage their figures a little by introducing a fiddle factor of their own, and as such to a greater extent the argument that you can't trust the numbers on the box looses some credence.  In simple terms we apply the same pinch of salt to each of them

Also as I've alluded to, I'm not going to get into a game of Top Trumps here. If I were to sit and write about how these fans compared to the other 100s if not 1000s on the market I'd have enough material for a dissertation.  What I have done is compare the BitFenix fans to the originals and to a few key member of the opposition and (aside from the ridiculous Gentle typhoon 5400), what might be considered the direct competition.

So how does the Bitfenix Spectre Pro fare? Well they are a definite improvement on the original Spectre range, and that's not meant to sound like a criticism of the originals. Across the range like for like they shift more air than the originals.  If you've taken the time to look over the comparison figures at the top of each page you'll see that that BitFenix have indeed listened to their customers and released a series of fans with much better airflow and much better Static pressure. it's clear that this is at the expense of a slight increase in noise, but the Decibel being the fickle logarithmic measure that it is the slight increases in numbers don't really relate to an perceptible increase in noise. In simple terms they're still very quiet.  With regards to the others in the test, it holds it own I think, slightly bettered by the cluster on temps but only by a small margin.  The others in the test are higher RPM fans, so will invariably produce better temps, again the trade off being noise, all apart from the Silverstone AP, which didn't seem to know what to do.

While we're talking about the Silverstones, it's worth mentioning that the design of the radial struts is very similar to that of the Silverstone Air penetrator fans, although the struts are not nearly as pronounced or numerous, the effect of these struts can be felt rather than seen as the Silverstones are able to project a column of air a good meter from the fan, whereas the Pros only manage 50cm or so, which I guess is as much as is needed for most cases.  It is perhaps these struts that give the AP Silverstone slightly higher static pressure but rob it of it's airflow.  The other fans on test could not in all fairness be said to project a column of air as such.

So farso good.  But perfect?  Nearly.  I like to write a balanced review, and to do so you have to present the bad along with the good.  It's actually easier to write a review where there's plenty to say on both sides.  With the Pros though it's not that easy.  if I wanted to be picky, and I mean really picky I'd have to say I'm a little surprised that they chose not to braid the wires in the simply stunning Alchemy braid, perhaps a cost consideration.  BitFenix have also chosen to drop a few LED colour options from the range, although these are still available in the original Spectre.  Presumably the colours dropped weren't a great seller in the originals.  The only other thing is that although the 200mm and the 230mm model are made to fit different mounting sizes there's not a great deal of difference in the fan sizes.  Don't believe me, look back at the images on the page for the 230mm fan and you'll see one where I've laid the 200mm over the 230mm

Choosing fans is very subjective, and is lead to a certain extent by our requirements or at least perceived requirements.  In performance terms these fans are as good as a great many out there, and a good deal better than most.  Sure, they're not the quietest, but if your primary need is a quiet fan then you're going to give up CFM and static pressure.  If a massive airflow and Static pressure is your priority then you go for the high RPM Scythes and expect to be deafened in the process and have a fan in your case that looks like it's made from a recycled wheelie bin.

However if your not on these extreme margins and want a good honest fan that does the job, shifts the air and has a respectable static pressure and looks stunning into the bargain then I think it's hard to beat the Spectre Pro

These fans are something rare, something that little bit different.  In a game of top trumps they're the card that might not be the absolute best in any given specific area, but they are the best all rounder in the pack.  And all this without breaking the bank

For that reason i'm giving them the first Gold award I have given, I really do think they are something that little bit special.  A great all rounder, and pretty with it.

Thanks to BitFenix for the fans on test here today, you can discuss your thoughts in our forums.

For the measurement of noise, you could consider using a frequency metre and then convert the sound from decibels to phons, because measuring in phons will take into account how loud we perceive the sound, because different frequencies of the same intensity, won't seem as loud as each other. The frequencies could also affect how loud it will sound from inside the case, because higher frequencies don't diffract as much as lower frequency sounds.

SieB
Not bad, great as normal case fans but a bit to low on the Static pressure for radiators. I like how they come apart easy though, makes them easier to paint if you wanted to do it

G-Dubs
I did give some thought to the measurement of sound, but as to do it accurately requires sound proofed rooms etc it was a little impracticalQuote

G-Dubs
Nice to see people are paying attention, It was of course planted deliberately just to check you guys paid attention to detail