We said at the start of this review that although the Phenom came in both Micro-ATX as well as Mini-ITX form factors we'd be focussing on the Micro-ATX version of this case.  However, to do so exclusively would not be telling the whole story.  The reason for not going into too much depth, or indeed for not reviewing the Mini-ITX case in its own right is that its internals are shared with those of the Prodigy and as such it's fair to say they have already been covered at length in Toms review of May 2012.

We will though be having a quick gander over it and taking a quick look at how the two cases vary.  Just so you guys don't get too confused, the black case is the Micro-ATX that we've used for the body of this review and the white case is the Mini-ITX version.  We do like to keep things simple here. 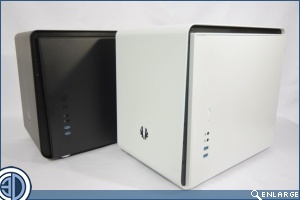 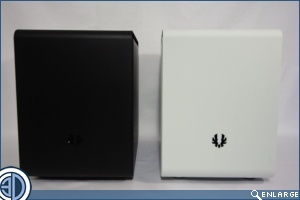 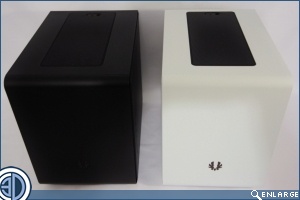 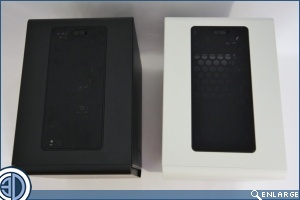 It's not until we look round the back that we see the variances between the two cases.  As with the Prodigy the Phenom-ITX supports the smaller motherboards and has only 2 expansion slots as opposed to the Micro ATX vesions 5 slots. 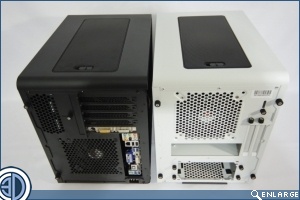 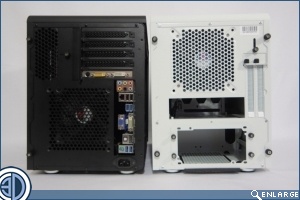 No you're not having a seizure and this isn't one of those optical illusion tests.  Just to show that the two chassis are identical we've swapped the door panels over.  If you wanted you could also swap one of or both of the exterior panels giving a contrasting interior and exterior.  We thing it looks kinda cool.  Any two tone fans out there? 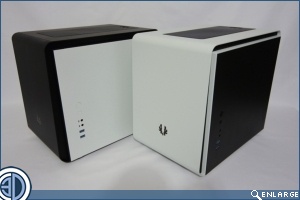 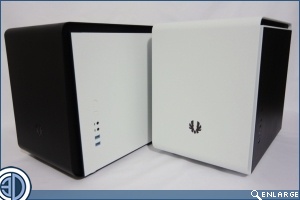 A real quick look at the interior as it would be rude not to, but as you can see it's a carbon copy of the Prodigy, which is no bad thing.  Our only real concern with the Mini-ITX version of the Phenom is the lack of airflow in the front of the case.  Although there's a 120mm fan on intake duty the actual airflow to it from the outside world is more than a little restricted.  Take a close look at what appear to be mesh vent strips down the leading front edges and you'll see they are in fact for the most part contiguous with the white metal panel posterior to them, with the only actual front ventilation coming from seven 5mm holes down each side, some of which can be seen in the images below. 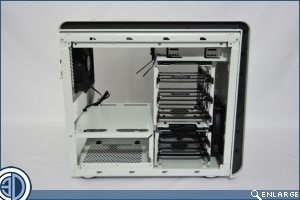 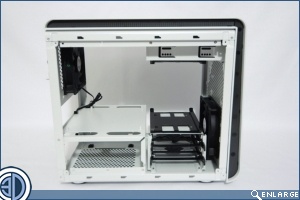 Huge air coolers can still be slipped in here with ease though, but if you're thinking of putting a rad in the front remember the low airflow we talked about above. 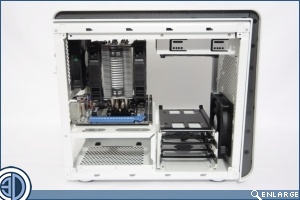 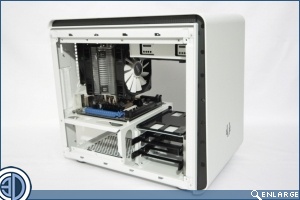 And although you can still fit monster GPUs in the vented side panel seen with the Prodigy is absent from the ITX version of the  Phenom, meaning you may leave your Graphics card gasping for air as it'll be hard up against the solid edge of the case side panel. 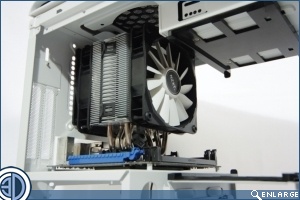 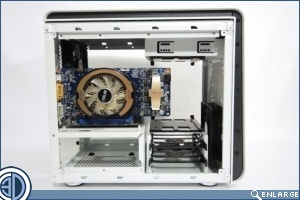