Looking at air cooling first, the Phenom will take a decent sized tower type cooler, in fact anything up to 160mm will fit just fine even with the HDDs mounted on the vertical brace rack.  If you absolutely have to cram a gargantuan tower cooler into this case then removing the HDD rack will garner you an additional 35mm of space.  having said how big a cooler we can get in we also need to think about how we're going to orientate it.  We've left the fans in he case in their stock configuration, and positioned the cooler to push air out through the rear extract.  With this in mind it might be better to have the fan in the base of the case swapped round to intake, or to remove it and place it in the roof as an extract. 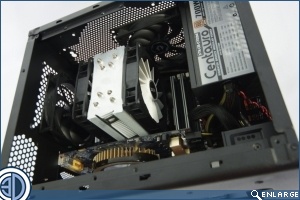 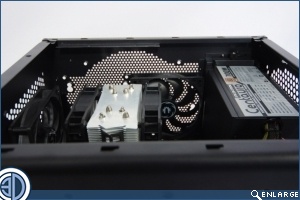 The image below left shows the cooler rotated through 90 degrees and pulling air up from the base of the case.  Again we'd want to swap the base of case fan to intake or swap it out to the roof as an extract, perhaps adding another as we've shown in the image below right (please note the case does not come with fans in the roof, these have been added by us for illustrative purposes).  Now this might seem a pretty ideal set up, until we consider the air flow over the graphics card, which as you've no doubt worked out is getting hit on its back plate by warm air from the CPU cooler and is fighting to pull cool air in from the roof which is busy trying to extract. 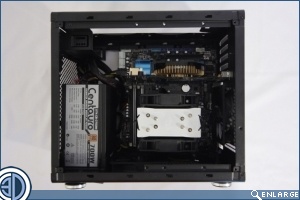 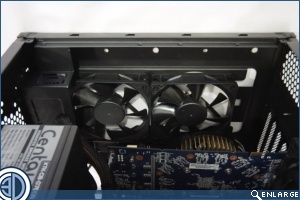 Perhaps we'll have more luck with water-cooling.  Native water support for a 240mm radiator in a case of this size used to be unheard of only a few years back, yet here we are able to fit in a dual rad and fans.  There are a few provisos though.  First off you're not going to want to stick anything more than 35mm thick in the roof as it will impinge the top of your GPU, No problem if you're going for one of the many great AIOs on the market such as the H100i or the Seidon 240.  Secondly, if you want to run SLI or Cross Fire and a rad in the roof, you're going to have to choose between the two as it's not possible to fit both due to the height restriction.  All is not lost though as along with any of the 120mm rad based units such as the H80i and H60 you can also get a 140mm based AIO such as the Kraken X40 or H90 in the rear fan position. 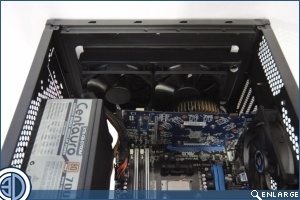 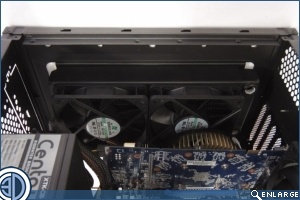 To give you an idea of just how much room you have we've shown the Phenom with the 35mm thick XSPC RS240 rad and a standard 25mm thick fan.  Combining these with our rather antiquated Asus EN8800GT Graphics card which weighs in at 40mm thick we're left with just 12mm of space. 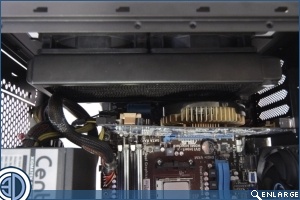 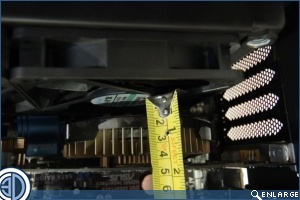 However you orientate your rad and fans you're going to have to compromise.  An extract system, whether in push or pull makes the most sense thermodynamically but with the intake of the GPU so close to the face of the rad or the fans may lead to them fighting each other for air and at worst set up eddy currents which may effect airflow and static pressure through the rads.  Setting up the rad with the fans on intake will pull cool air in directly from the outside of the case  but will then blow it directly over the fan intake for the GPU, which again isn't ideal. 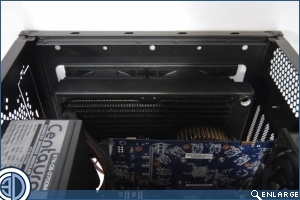 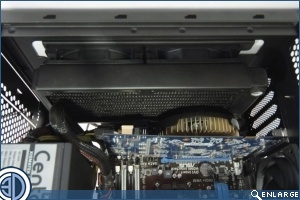