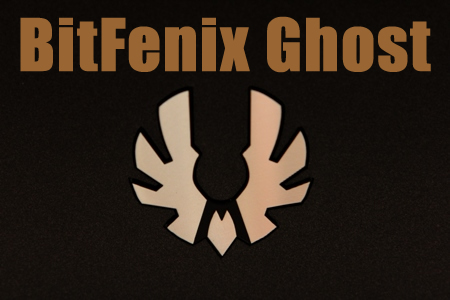 The Ghost as it's name might suggest is marketed as a "silent" case, and as must go about it's business as quietly as possible.  The quest for noise reduction in cases is often traded for cooling performance.  Not a problem if you just want a case to sit quietly and elegantly beside you on the desk while you browse T'interweb, but more of an issue if you want it to stuff it full of performance kit and then clock the twangers off it.  In this quest for silence BitFenix open the batting well with the inclusion of two of their very quiet Spectre fans.  These are the original Spectres and as such are a lower RPM and quieter than the Pro's.  Bitfenix have also lined the majority of the internal surfaces with their proprietary sound deadening material Serenitek, so we can tick that box.  However things do get a bit confusing when we examine the decision to put in a large open roof vent.  Why go to all the effort of enclosing the front and sides if you're going to open the roof and let the noise out?  Well I think I have the answer.  First off, the amount of noise that actually escapes through this aperture is negligible, and what does is focused straight up.  You'll need to select a CPU cooler with a quiet fan to make the most of it, but then if you're building a quiet rig that's a bit of a no brainer anyway.  Secondly, and more importantly Although primarily marketed as an air cooling case this roof apperture is key in providing native water-cooling support.  Pop a 240 radiator in there and strap on a set of quiet fans and you have a very quiet set up indeed.

If you've read the rest of the review (as we're sure you have) then you'll know that the cable management options are less than perfect.  Sure with 20mm of space behid the Motherboard there's plenty of room to manouver, but with only 4 cable tie points it gets hard to acheive a good job. Another odd decission on behalf of BitFenix was too not factory fit the grommets or the rubber PSU mounts.  I can only assume that these exclusions played a major part in bringing the cost of the case down as otherwise I can't see the logic there.

Aesthetics wise the Ghost is quite a looker.  Not actually black, more of a very very very very very dark grey.  Anthracite I guess, with a slight metallic or perhaps pearlescant quality too it, but nothing too in your face.  The use of Nanochrome (sorry, but it still makes me think of my Crysis suit) really does give an even colour effect to both the plastic and the metal, ensuring that the finish and blend is perfect, so no two tone paint jobs here.  All the metal panels are straight and strong, with the sides and doors lined with Serenitek, which along with sound deadening provides additional rigidity.  The door itself can easily be swapped to open in either direction.  As with many cases the roof and front are made from plastic, but be assured there's strength and rigidity here also.  BitFenix tick all the right boxes with the inclusion of easily removable filters on all vented areas, and again the materials and workmanship seen are of a high level.  Inside the case things continue to impress.  Ample storage for up to 7x3.5" or 4x3.5 and 3x2.5" drives is offered, with the case able  to accept coolers up to 160mm and GPUs up to 430mm in length with the upper bay removed, 335mm with the bays configured for 2.5" drives and 310mm with the bays configured for 3.5" drives.  We were a little worried about the inclusion of self adhesive PSU mounting feet, but in reality when used the fit was still fine and there was no discernible vibration transmission from the PSU to the case, so I guess BitFenix must've gotten their tolerances just right.

So what of the competition?  Although the "silent" case market is not perhaps quite as saturated as the gaming/performance case side, that's no to say there's no one in goal at the other end of the pitch.  However at just a smidge over £70 the Ghost stacks up quite well from a price perspective against the other main contenders.  Closest to the Ghost from price wise is the Define R4 which ofers a lot that the Ghost does but at £10 more.  Although the R4 lacks the native watercooling support offered by the ghost it does offer better sound deadening capabilities with the option to blank of any unsued fan mounts.  In all other respects the R4 and Ghost trade punches quite evenly so if you're looking to choose between the two we stronly reccomend you take the time to peruse both reviews.  Further up the food chain are the likes of the Silencio 650, reviewed by us not too long ago.  The Silencio is a good £40 more than the Ghost and although it offers an arguably higher build quality and finish and a few little extras here and there, there's little to justify the additional cost.

When we first started looking at the Ghost there were more than a few niggles that put it in a less than favourable light.  Time spent with it however has shown that as an overall entity it comes together well.  It's clear that Bitfenix have had to make choices to get the price of the case down as low as they have, but what we're left with is the feel of a quality case where the essentials are present and a few of the bells and whistles, such as a built in fan controller for example are missing.  This feeling of quality can be attributed in no small part to the use of the nanotech paint finish and the overall level of workmanship.  Although we heartily applaud the native water-cooling support we can't help thinking that the ability to blank the roof vent off would have had us grinning from ear to ear.  I guess the decision not to offer this was one of the many cost option choices BitFenix had to make along the way.

What we have then is a basic but very good value case.  Quality is good, with a feature set you would expect for the price.  Ok so a few little niggles to get in the way of perfention.  Put it this way, if you've been looking at the R4 as a budget silent case your decission just got a little harder.  A Ghost it may ben but a Slimmer it isn't

Thanks to BitFenix for sending the Ghost in for review, you can discuss your thoughts in the OC3D Forums.

Steenie
Great review, been waiting a while for this review!

sheroo
Have to admit I kinda discounted this in my search for a quiet case due to that open mesh top. I don't really see how it can compete with the R4 as a purely "quiet" case with that open top?Quote

Chimp
Been waiting for the OC3D review on this... Project chimp has its case. I LOVE IT!Quote

mysticode
Thanks very much for the review. Would love to see Tom do a once over of it in a video as well.

andrevautour
The case looks great overall. One small thing, though. I have one of those bitfenix LED strips 30cm white, and it is WAY too bright for me to use anywhere in or around the case (for my taste) it seems more suited for use as a flood light than for inside a case. The blue model is more subtle.

Did you ever find it too bright/distracting having two white strips at the bottom of the case? I know the bitfenix strips don't have a on/off so I could see it being distracting & annoying at night during work/gaming/movies etc having such an immensely bright light coming from under the case with no on/off switch.Quote
Reply