RGB lighting is one of the larger crazes that the PC market has been adopting with enthusiasm over the past few years, so much so that it is sometimes difficult to find components that lack some form of RGB LEDs.

be quiet! is a company that has resisted the RGB trend with their recent fan releases, choosing to focus on noise levels and airflow with their newest fan releases. be quiet! has rightly focused on their brand identity, rather than jump on the latest trend at the cost of losing what's important to them. However, the demand for RGB be quiet! fans exist, which inevitably resulted in the company investing in ARGB illuminated versions of their Pure Wings series PWM fans.

With their new ARGB (Addressable RGB) fan models, be quiet! is building upon the success of their Light Winds series by adding support for RGB LED lighting. Whether you want crazy rainbow effects or solid colours anywhere on the RGB spectrum is a matter of choice, as is what speeds you plan to operate these fans using their PWM controllers.

No Software, No Problem

Unlike many RGB fan manufacturers, be quiet! is not trying to lock customers into an RGB lighting ecosystem. be quiet's ARGB Light Wings fans all use standard 3-pin 5V ARGB connectors for RGB control, allowing them to be controlled using any modern motherboard or product with a compatible header.

Lighting-wise, these fans support RGB lighting that is as complex as your system's software allows. This may be an upside or a downside depending on your preference, but in our eyes, it gives users more choice and allows users to easily synchronise their motherboard and fan lighting using the same software package.

- Introduction, Unboxing, and Specifications (This page) 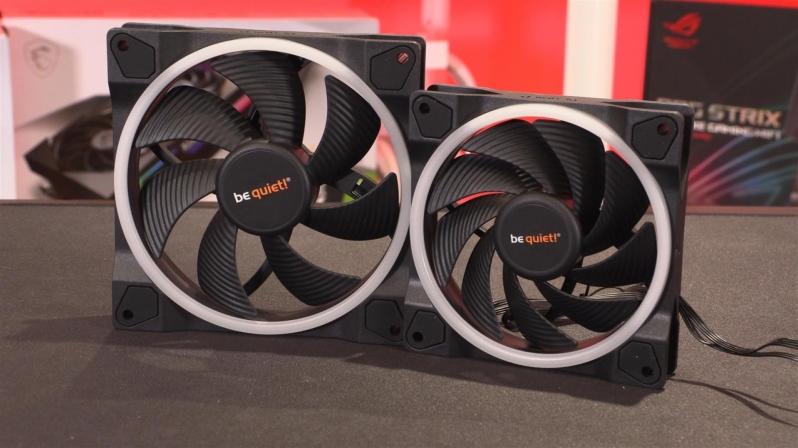 All of be quiet's Light Wings ARGB fans feature 2- individually addressable LEDs and a diffuser that spreads light both out of the front and rear of the fan. These fans are available on their own or as part of a triple pack, and in standard PWM and in high-speed PWM models. These fans also have 120mm and 140mm versions.

Within be quiet's triple pack comes three fans and an RGB hub that supports up to six ARGB components in total. This allows six ARGB devices to be connected to your motherboard using a single 5V ARGB header.

With their fan triple pack, be quiet! delivers to their users their fans, fan mounting hardware, a 6-port fan hub, their fan hub cables, and some 3M tape that can be used to mount the fan hub within your PC case. 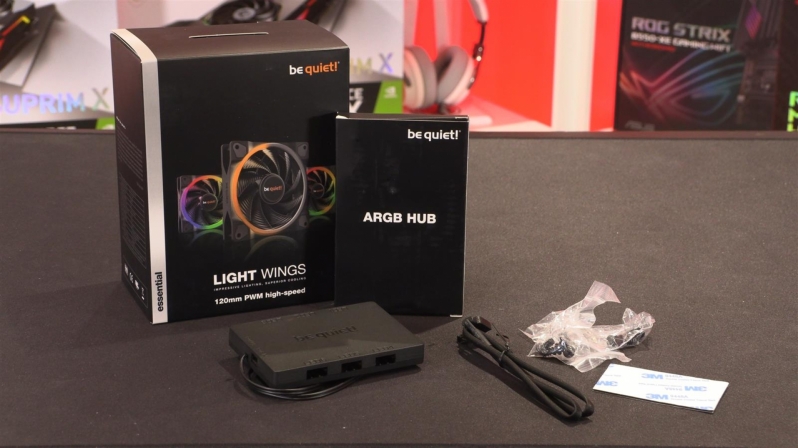 As mentioned previously, be quiet's ARGB hub supports up to six ARGB devices and can be used to connect supported devices to a single ARGB header on your motherboard or external ARGB controller. This hub is small enough to sit behind the motherboard tray of most modern PC cases, which should make cable management a breeze. 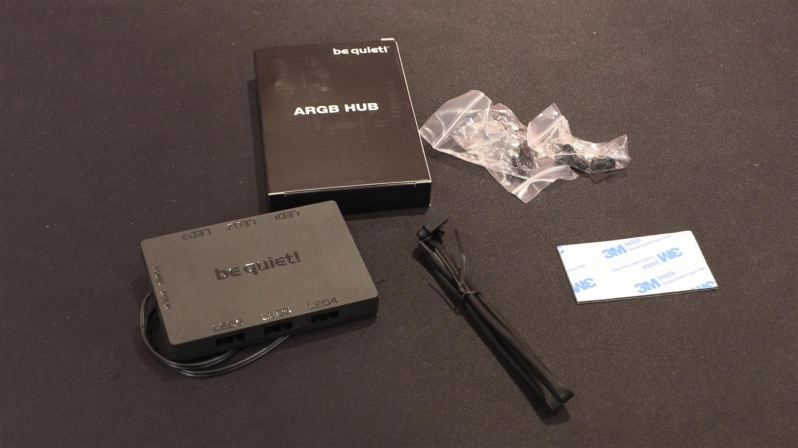 be quiet's Light Wings ARGB fans are available in 120mm and 140mm sizes and in standard speed and high-speed versions. All of these gans are rated as having a lifespan of 60,000 hours, use PWM connectors, and are rated as maximum noise levels of 31dBA or lower.

With be quiet's standard (quiet) models, be quiet uses a seven fan blade design and uses lower fan speeds than their high-speed counterparts. be quiet's high-speed models use nine fan blades and are designed for heatsinks and water cooling radiators.

be quiet's silence optimised fans will keep noise levels below 24 dBA, which is quiet enough to not be heard in most homes. Even their high-speed models are relatively quiet at their maximum speeds.

With these fans being PWM controlled, most users will be able to control the speeds of these fans using their motherboard's software or dedicated fan controllers. This means that users will likely be using these fans at below their 100% speeds on most occasions, making these fans practically silent in most use cases. That said, these fans can still move plenty of air. If these fans give you airflow problems, your problem is your case, not your fans. 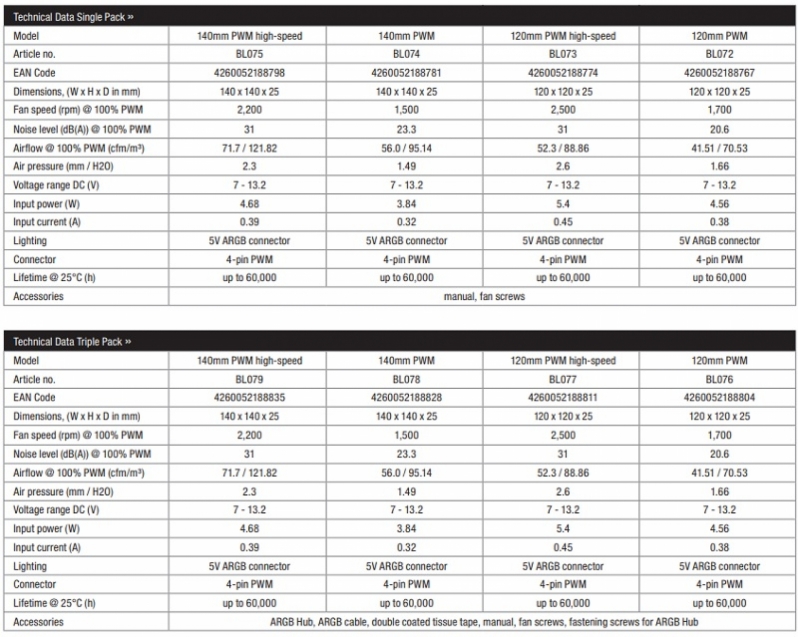 As you can see, be quiet has supplied these fans with cables that are long enough for most PC cases, making cable management fairly easy. There won't be many situations where you are putting tension on these cables to reach your ARGB hub or your nearest PWM fan header. 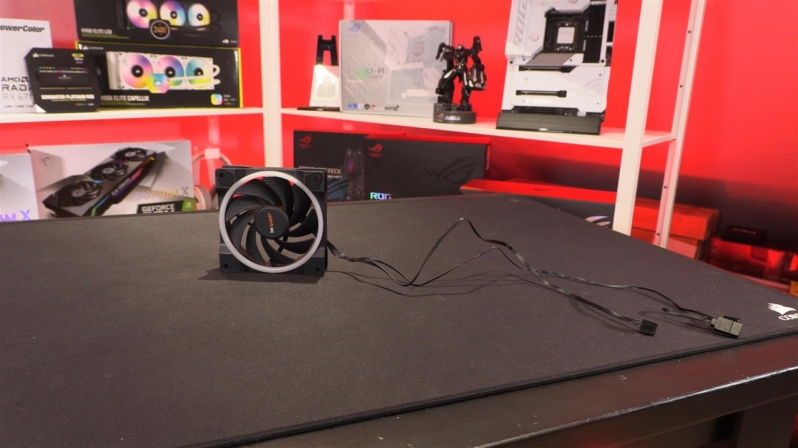 be quiet's ARGB fan connectors feature a daisy chain option, allowing users to chain these fans together as much as they'd like. That said, some users will not like the fact that this daisy chain option is at the end of a long cable, and not near the fan itself. This can create a lot of cable clutter for multi-fan setups on a large liquid cooling radiator, though it enables daisy-chaining for fans that are far apart. As an option, it is a mixed bag and your preference will depend on how you prefer to set up your system. 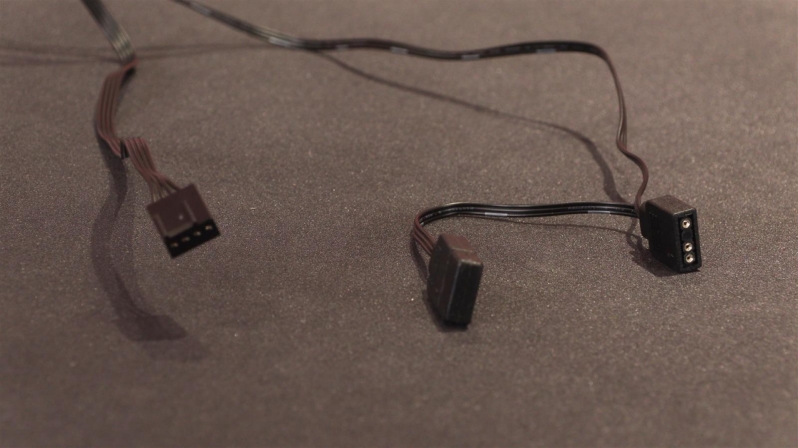 Sadly, some manufacturers ignore the fact that many PC gamers see their fans from behind, often through a tempered glass-windowed side panel. be quiet has designed their ARGB silent wings fans to showcase their ARGB illumination from their front and rear, making their lighting beautiful regardless of their orientation. 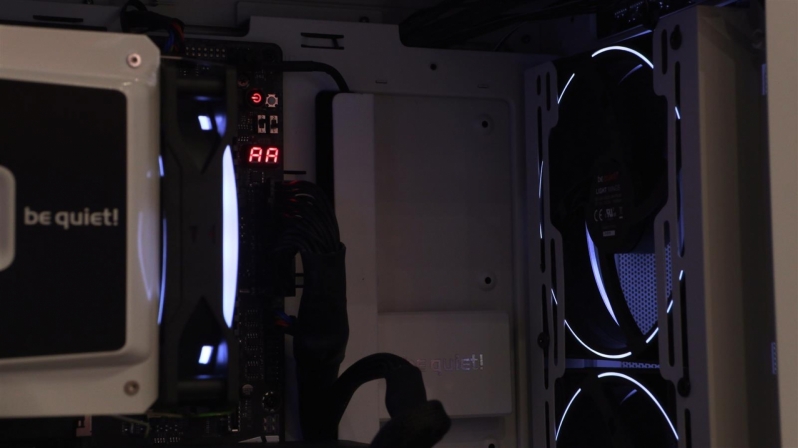 be quiet! Light Wings fans are available in stores from November 23 at the following suggested retail prices:

Bartacus
So far it seems only Fractal have done it right with RGB fans. Fractals Prisma line are daisy-chain RGB, no hub required. Any solution that requires a hub isn't ideal IMO. But I'm sure these will still be excellent fans though, Be Quiet makes good stuff.Quote

Dawelio
Quote:
Lian Li's UniFans also technically doesn't require a hub. You can purchase separately an ARGB header to connect to the motherboard and control the RGB that way.Quote

Warchild
Quote:
Daisy chaining with No rgb will win it for me. The new Phanteks are really tempting but I just cant fathom that cost.

It would be more expensive than buying a 12900k CPU for me...Quote

KingNosser
Persoanally I don't care about ARGB/RGB on fans so long as i can get the colour i want, I have some cheap blue LED ring fans and they do the job fine and were less than £5 each from scan.

Some of the nicer fans while doing a better job cost a packet like £25 a fan to me that is a waste it's not like it's going to bring down the ambient temp in the room so i don't see the point myself, sure it might get you 1-2C lower but at that price no thanks.Quote
Reply