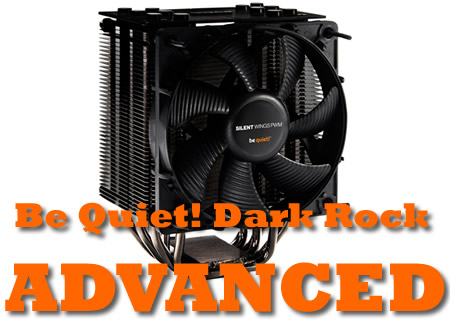 Be Quiet have been around for some time and are better known for their range of high quality power supplies. As with many companies of late they have recently felt the need to enter new markets, with their Silent Wings fan range it doesn't take a descendant of Einstein to work out that at some point they would release a heat-sink to use them on.

We have covered the top of the range 'Pro' version here at OC3D before, but on test today is its single-fanned younger brother confusingly named the 'Advanced'. Enough's enough lets look at the specs:

The Dark RockC1 range of coolers is designed for the enthusiastic PC user who expects a great deal from their computer: performance, reliability and a very quiet operation.

The be quiet! Dark Rock AdvancedC1 combines maximum cooling efficiency with a pleasantly quiet operation. With an extremely low noise level, efficient cooling is provided for gaming, multimedia and CAD systems even at maximum processing power. This CPU cooler is enhanced by the high-quality materials used, as well as its attractive design.

•The six three-dimensional moulded heat pipes work rapidly to transport the heat with the help of an oxygen-free copper layer (OFC) to the optimum point within the cooling lamellas.
•The single-tower layout with six heat pipes enables excellent heat dissipation within a small space.
Nice and quiet
•The 120-mm SilentWings PWM fan guarantees the best ratio of cooling efficiency to noise level.
•The wave-shaped contour of the cooling lamellas prevents noises and optimises the airflow.
High-quality materials
•The fan surfaces are coated in dark nickel.
•The brushed, fully aluminium cover protects the cooling lamellas.
•The stable backplate ensures a shockproof attachment, even when transporting the computer. 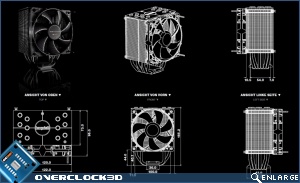 We have had a wide range of coolers to test at OC3D this year and one thing that has become very apparent is there isn't really a cooler that covers every base. Not one cooler can look amazing, perform as well as the high-end coolers and still remain quiet in operation. So basically what I'm saying is you either need to have one aspect that is most important to you or learn to compromise.

The BQ Advanced sadly does not break this trend, with its stealthy all black looks and silent operation it ticks two boxes. When how ever we look at the delta temperatures even the £30 Trinity betters it. Its has to be said though that even with the Silent Wings fan at 12v this is probably THE quietest cooler we have ever tested. So if you take that into account are the temperatures really that bad? We test our heat sinks on the X58 platform as this is the best way for us to be able to pump and immense amount of heat into the cooler to really weed out the men from the boys. The Intel 2600k for example wouldn't put out the same amount of heat even with 1.4v being forced through its silicone veins. Without this becoming a conclusion on our testing it is worth considering these points if you are looking for a 1155 cooler. Would this keep a 2600k @ 4.6GHz silent and still hover in the low 70c's? Yes because we just so happen to have used one in a test system recently but it was not one we were videoing as it's all still under wraps....

So the moral of our confusing story is the Be Quiet Dark Rock Advanced is a very good looking and near on silent cooler. If these two factors are what you are looking for in a heatsink then then this really should be at the top of your list of possibilities. It's absolutely perfect for a reasonable overclock on a 1155 or AM3 system, it just falls slightly short when trying to cope with a 1366.

Thanks to Be Quiet! for the sample on test today, you can discuss this and many other reviews in our forums.

Ovek
The mounting method is horrid, it really is a four arm operation. Shame really considering there really isn't any need to do that way.Quote

SieB
I watched the vid last night and was quite impressed with it and considering it's only a single fan cooler it performs pretty good.Quote

murphy7801
So many companies use horrible mounting systems don't know why they think its ok in this day an age. If this cooler was 30 pounds I would by one but not at that price despite its looks.Quote