Introduction - A new player has entered the AIO arena

The world of liquid cooling has transformed over the past decade, shifting from the era of complicated custom cooling and into the age of accessibility. Now, liquid cooled processors are commonplace, especially amongst high-end users, moving away from the giant heatsinks of old towards large water cooling radiators and neatly decorated water blocks.

ASUS is the newest player in the All-In-One (AIO) liquid cooling market, releasing four new high-end products that range from radiator sizes of 120mm to 360mm across their new Ryuo and Ryujin lineups.

Innovation is far from dead in the world of Closed-Loop Liquid Coolers (CLCs), with every generation of products coming with quieter pumps, refined cold plates and tweaks to both fan and radiator designs. Things have come a long way since Corsair released their original H100 series cooler, and things will continue to evolve.

What ASUS brings to the table is customisability, releasing both their Ryuo and Ryujin coolers with ARGB lighting and a 1.77-inch full-colour OLED display, which can be used to monitor thermals, clock speeds and other important data. Alternatively, this screen could be used to add a custom logo to your system, whether it be your online avatar or perhaps a company logo. Even animations are displayable on both coolers. 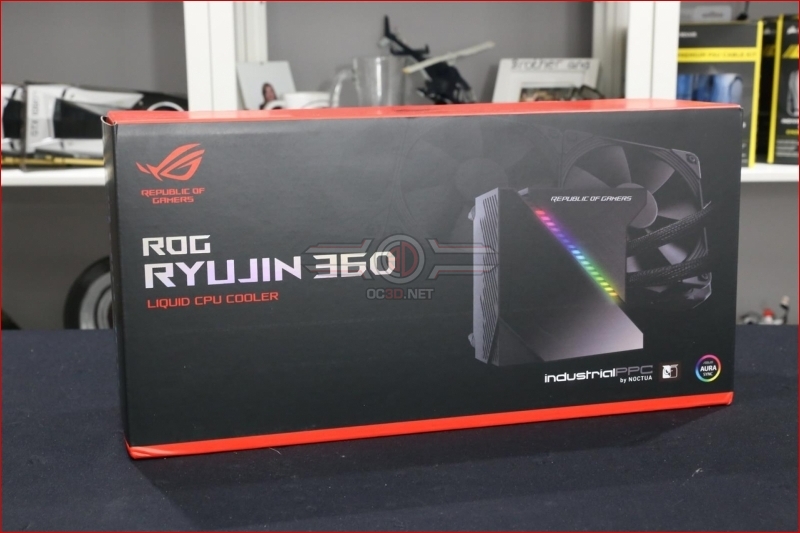 Let's start at the high-end with the ROG Ryujin, ASUS' high-end AIO liquid cooler. Roughly translated, Ryujin translates to "Dragon God" and symbolises power over the ocean, making it a suitable name for a high-end water cooler.

Naming scheme aside, the Ryujin is available with both 240mm and 360mm radiator sizes and ships with Noctua's Industrial-Grade PPC fans, which are based on the company's high-end NF-F12 fans, which are popular amongst high-end PC builders.

On top of that, the Ryujin ships with a fan under the CLC's top plate, which is designed to provide additional airflow to motherboard components, such as VRMs, and nearby M.2 SSDs. ASUS estimated that this fan could make VRMs and M.2 drives up to 30% cooler. 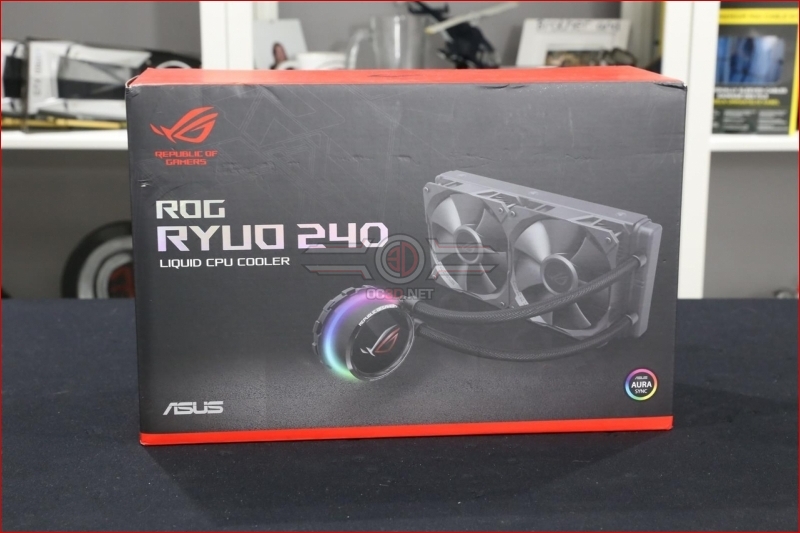 Lower in ASUS' liquid cooling lineup stands the ROG Ryuo, where Ryuo translates to "Dragon King", placing it below the Ryujin. This CLC is available with 120mm and 240mm radiators and has several major design changes when compared to its higher-end counterpart.

The most obvious of these changes is the Ryuo's pump/top design, which no longer includes a cooling fan. It retains the same 1.77-inch screen as the Ryujin, but its smaller size makes the display more prominent.

Outside of this, ASUS has decided to utilise their custom ROG fan designs for the Ryuo, offering users a nice ROG logo at the centre of each fan and a "Republic of Gamers" inscription on one of its corners. These fans are said to offer 7% more static pressure than the fans included in "other AIO products" and deliver 14% more airflow, though ASUS has not listed the name of their competitor, making this performance metric rather useless.

Dicehunter
Great review, Personally wouldn't use AI suite for the fans, I'd just plug the fans into a separate fan controller and do it that way.Quote

AlienALX
£250. Wow. That is bordering on complete custom loop prices, sans the £10 screen.Quote

looz
But do they have the Asus ROG logo and branding??!

Bhebhe
This is the new generation of coolers, displaying gifs and others stuff on its lcd screen.Quote

AlienALX
Quote:
It's nothing new apart from the fact it's glued to the pump.

Then you can program it, much like the one Asus are using.

I fitted mine into the front of my Bitfenix case, then all of a sudden Bitfenix release a case with a mini screen in. *Jeremy Clarkson* "Some say it's coincidence, others that they stole the idea"

I mean that in jest btw, but yeah manus have been stealing ideas from modders for years and years. But aye, you could have done this yourself 9 years ago.Quote
Reply