Introduction
In the very recent past AMD and Intel have been vocal about upcoming families of multiple core CPU’s which will take processors into an area that we have never seen before. With Intel’s current Q6600 quad-core and AMD’s soon to be released Phenom native quad-core processors on the horizon, eight and sixteen cored processors will no doubt follow as the process is perfected and applications demand it.
It is a well known fact that water-cooling is really beginning to become a viable mainstream alternative to traditional air-cooling measures. No longer is water-cooling purely the domain of the hardcore overclockers, but ever increasingly it is beginning to make its way into more and more people’s homes.
With the advent of quad-core processors and the successful saturation of the market with dual-core processors as well, a need has arisen for cooling methods to tame these multi-cored beasts. So how do we look towards cooling these processors more efficiently...With water-cooling of course!
Aqua-Pcs has provided water-cooling hardware for the performance enthusiast for some time now, and they even have their own 'Flow' range of gear available. Today we have been fortunate enough to have been given some samples of Aqua-Pcs Flow Performance CPU block. Pascal has sent me both the standard copper version and the Limited Edition silver plated block. If you are interested in the Silver LE version of the Flow Performance block at the conclusion of this review, then you had better hurry. According to Pascal, only 20 of them have been produced. 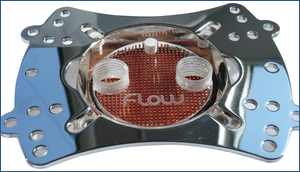 So without further delay let's have a look at the blocks in a little more detail.
Specifications
Unfortunately there really aren't any specifications for the Flow Performance CPU Block on Aqua-Pcs website, but the block appears to be very similar internally to the now discontinued XSPC Xtreme. So I'll try and give you the best information that I can...
- G1/4" Thread
- Copper Base
- Plastic Top
- Universal Mounting Plate
- Supports Sockets A/462, 478, 604/603 754/939/940, AM2 and LGA775
One interesting point worth mentioning here is that the XSPC Xtreme block was discontinued due to average cooling performance on dual-core, and more alarmingly, quad-core processors..Hence the addition of the XSPC X20 Delta.
Regardless, we'll be seeing how the Flow Performance CPU Block performs in just a few pages.
«Prev 1 2 3 4 5 Next»

Nice to see a review of the Flow Block Finally, my logo looks good as ever.

(I created the 'Flow' Logo for Pas)Quote
Reply