In this review, we have tested our coolers in a room temperature controlled environment and tested each CPU cooler with their stock fan configuration with their fans running directly from our system's power supply at both 12V and 7V (using fan speed reducers).

Each cooler will be tested on Windows 10 using OCCT to provide a heavy CPU load for half an hour, where we will use Ryzen Master to record CPU temperatures throughout testing. The highest measured temperatures are recorded on the graphs below.

Any CPU cooler that reached 70 degrees automatically failed our thermal test, though it is worth noting that no coolers reached this high threshold unless we overclocked our CPU.

In our stock tests, we used 2666MHz memory, the highest that Ryzen officially supports, with our overclocked tests running at 3200MHz to provide more stress on the system.

These changes in voltages cause some strange results at stock settings, though it really does go to show the importance of fine tuning your CPU's core voltages when you want to control your load temperatures. More volts means more heat, so it is always best to use the lowest voltage that is stable.

At stock setting all of the CPU coolers that we have tested were easily able to cooler our Ryzen 7 1800X, even our £36.95 Cryorig H7, which means that Ryzen 7 systems can easily be built with budget-oriented CPU coolers.

Moving up to our AIO liquid coolers we can see one common trend, that load temperatures would simply not decrease below 34 degrees while under load under OCCT. This is unsurprising since this is only 14 degrees higher than the room's ambient temperature.

It is clear that at stock setting most aftermarket CPU coolers will be adequate to run AMD's Ryzen 7 1800X, though that changes when we start overclocking. 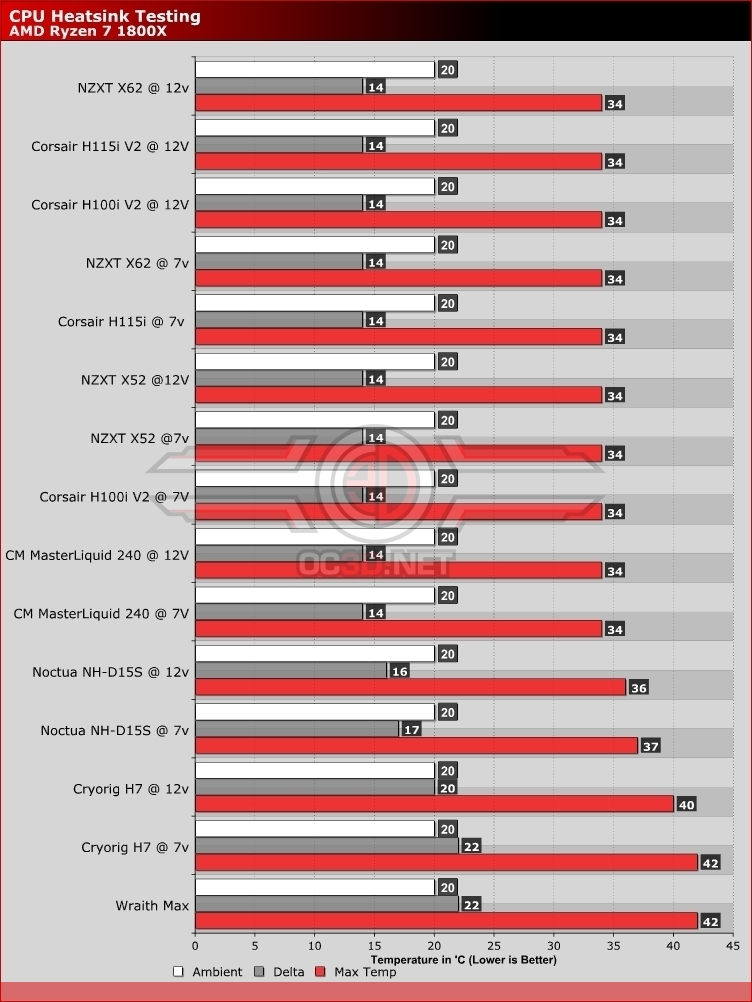 For our overclocked CPU testing we ran our Ryzen 7 1800X at 4GHz with a core voltage of 1.4V and a SoC voltage of 1.1V. We ran the CPU with our memory kit clocked at 3200MHz and ran the OCCT to simulate a worst case scenario CPU/thermal load.

In the below graph we can see that the Cryorig H7 has been taken off the graph, with the Noctua NH-D15S failing to keep temperatures under 70 degrees unless the fans were run at their highest speeds. It is clear then that heavy overclocks on our Ryzen 7 1800X will require an AIO liquid cooler to stay under 90 degrees without overly loud fans.

We can see that by using larger liquid coolers that we can decrease the load temperature of our 4GHz R7 1800X to 60 degrees or below, with the largest 280mm liquid coolers like the Corsair H115i and the NZXT X62 providing the best performance. 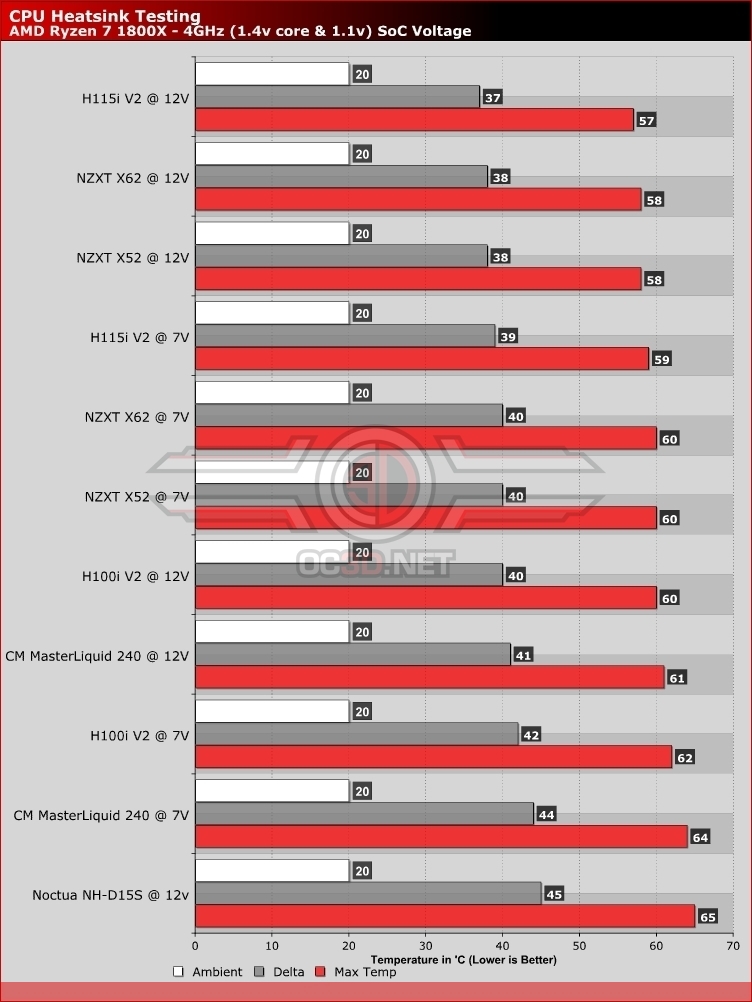