In the very recent past AMD and Intel have been vocal about upcoming families of multiple core CPU's which will take processors into an area that we have never seen before. With Intel's current Q6600/ QX quad-core range and AMD's soon to be released Phenom native quad-core processors on the horizon, eight and sixteen cored processors will no doubt follow as the process is perfected and applications demand it.

It is a well known fact that water-cooling is really beginning to become a viable mainstream alternative to traditional air-cooling measures. No longer is water-cooling purely the domain of the hardcore overclockers, but ever increasingly it is beginning to make its way into more and more people's homes.
With the advent of quad-core processors and the successful saturation of the market with dual-core processors as well, a need has arisen for cooling methods to tame these multi-cored beasts. So how do we look towards cooling these processors more efficiently...With water-cooling of course! 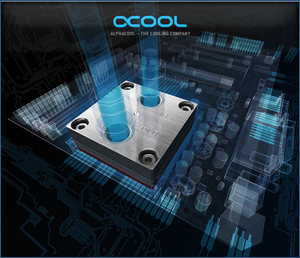 Alphacool is a name synonymous with water-cooling hardware. The German based company made a name for themselves by producing quality, well-performing hardware for the PC enthusiast. However, in recent times it seemed that they simply dropped off the radar, allowing competitors to muscle in on their hard-earned market share.

Today, a revamped Alphacool seeks to restore itself back to the position that it held in the past, and continue on with manufacturing high-quality hardware as a commitment to both their current dedicated fan base and you, the prospective customer. The effort being made by Alphacool to regain lost ground is evident. From the fresh and enticing web page, through to the updated product lines, Alphacool is on a mission!

Today I have been given the opportunity to review the new Alphacool NexXxos X2 Bold HIGHFLOW waterblock which promises the highest performance nozzle waterblock with return flow channels, and enormous flow. Considering the exceptional performance of the current cooling champion, the D-TEK FuZion, it will be interesting to see how the Alphacool NexXxos X2 Bold HIGHFLOW performs. Will it tame the Quad-core beast? 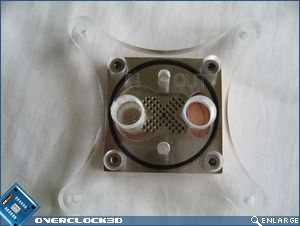 
Now that we've seen the new Alphacool NexXxos X2 Bold HIGHFLOW's specifications, let's head over the page to check the waterblock out in a little more detail...
«Prev 1 2 3 4 5 6 Next»

In response to this Alphacool have adjusted their UK pricing and while PV's review was correct at the time of print, the new revised price is £35.99 inc VAT.Quote

sbrehm72255
I've always liked Alphacool products, but they are all so damned expensive over here in the US.Quote

While 'other' manufacturers have their products made in the far east, Alphacool, who are a German company, have their products made in Germany. As we all know, especially with me being a quallified engineer, if you want a quality produced product...look to Germany. Sadly this does get reflected in the price as there are no sweat shops in Germany but all in all with Alphacool you wil be getting a quality crafted product.

After all Audi, BMW, Mercedes, Lamorghini etc.. can't be wrong....Quote

The US government is the other reason all European products cost so much (import duties, shipping and the like).Quote
Reply