Akasa are an old hand when it comes to CPU cooling. With a large range of coolers on the market and a reputation for cheap, quiet and efficient coolers they are quite often first choice for those wanting quiet computing at a good price point.

Today we're taking a look at the Akasa Revo Thermaldynamic Cooler from Akasa. With a press release mentioning the terms "CPU Cooler" and "bubble pump" we just had to take a look.


The Technology - in brief

Rather than just re-hash Akasa's press release I'll give you my own thoughts on what Akasa have said about their cooler.

Basically the cooler has a liquid coolant that runs from a small chamber in the case of the cooler next to the CPU cooler and up into a small reservoir at one side of the radiator. This then goes through an "up-pipe" as Akasa put it (heat pipe) and into the radiator. Akasa then say that the "specially designed dual-component liquid-coolant acts as a bubble-pump" and forces heat along the radiator. Hmm, well to me that sounds like the heat moves through the radiator by convection, aided by heat bubbles in the system. At this point the radiator and fan cool the liquid through heat dissipation on a large surface area (just like a water-cooling rad) and the cold air travels through the "down pipe" back into the reservoir. 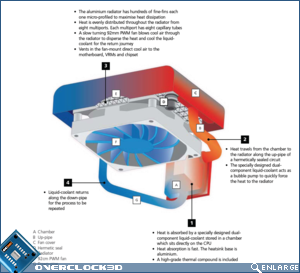 The air from the fan is also ducted around the CPU area cooling other components like the motherboard/chipset etc.

Now most heatpipe coolers have an array of anything from 2 to 8 heatpipes to cool down todays egg-fryers, but the Revo only has one, interesting.

Akasa have said that the Bubble pump technology is a lot more like a water cooling loop than a heatpipe cool. With the Radiator on the cooler I am in partial agreement. However, as you will see later Akasa have yet to achieve the results that watercooling gets.

The packaging for the Revo is pretty attractive and shows a pretty industrial looking heatsink on the front with a nice blue Akasa fan on it. Plenty of information abounds on the box so you're good to go there. 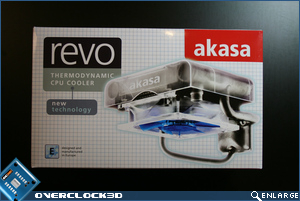 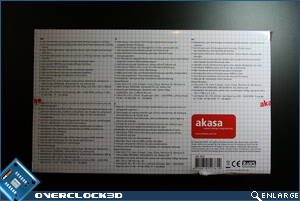 RoHS compliancy is certified for this cooler as it should be. 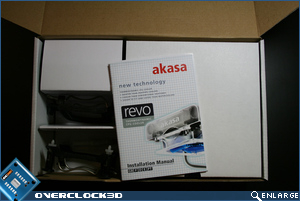 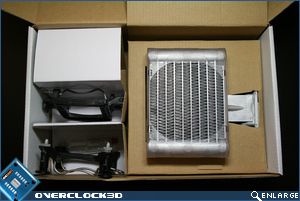 The inside of the box is well packed and shows off the unit when you first see it. No complaints here on packaging then.

The package with the cooler is a standard affair, albeit a little more tough looking than most. 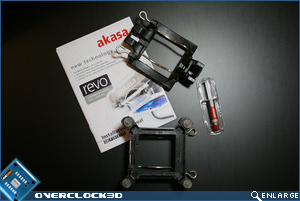 Everything you need to get you going is included, remember that the fan is already actually on the cooler so no need to buy one.

£30 bit OTT though, since you can get a Freezer pro for about £15 and that does just fine.Quote

FarFarAway
Quote:
Indeed, though the price is as below, $40


Quote:
Just what I thought, but it is new technology and R&D costs ££'sQuote

It has to be said, I started reading the review (excellent again btw) with a pretty optimistic slant - especially with the idea of the tech involved.

To be fair, it looks an equiv cooler of a stock Intel (give or take minimal temps), but quieter. That in mind, the price is OTT imo.

Agree with the conclusion tbh. (however personally disappointed a bit)Quote