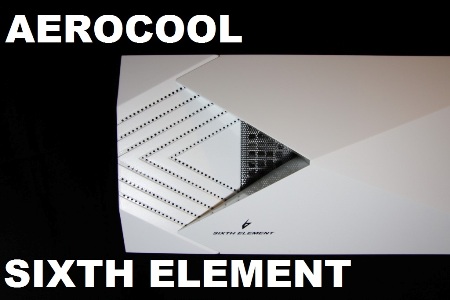 The Sixth Element White edition forms part of the line up of cases from AeroCool's Performance Gaming System range.  The Sixth Element wears the Red badge of the Professional Series, which puts it roughly mid way in the PGSline up.  The case is also available in Black, with either Blue or Red accented interiors.  In this review we shall be taking a look at the White edition.

The case is a Full/Mid-tower, making use of 6mm Japanese Steel and, as would be expected, fair amount of plastic for the outer shell and detail areas.  The case is windowed and comes with two 140mm fans pre installed.

Before writing this review I got to thinking what exactly the Sixth Element was.  As alluded to on the home page if Luc Besson is to be believed we've already established the nature of the 5th Element in the form of the not unattractive, white bandage clad, Milla Jovovich.  A quick trawl of the inter-web reveals more than a few opinions on the subject of the nature of the mysterious Sixth Element, with everything from Void, Consciousness, Space, Light and Darkness vying for the title.  So have AeroCool used any of these Holistic concepts to shape their design ethos? Doubtful.  In purely chemical terms of course the sixth element is Carbon.   Has the case been made from Carbon fibre?  Afraid not (at £78 that's not really likely is it now, and neither is a carbon fibre effect coating so don't go getting excited there either).  So why Sixth Element? Apart from it being a rather cool name of course.  Well it may just be coincidence, but there are certain similarities between the look of the case and the lines of the new Lamborghini Concept car, the Sesto Elemento (Sixth Element in Italian if you hadn't guessed).

All that said whatever the design influences are for case and whatever the inspiration for the nomenclature what we want to know is how good is it.

SieB
The front panel looks pretty funky but I don't like the side panel and the inside looks a bit basic too. Personally I think it's a bit highly priced and should be around £60, there are better cases for ~£77, 400/500R for example.Quote

sheroo
When are these manufacturers gonna get the message - if its a new case us enthusiasts expect at least 1 USB3.0 on the front with a suitable motherboard header, and if you're gonna put a side window on there - WE DON'T WANT ANY VENTS! and if you are gonna go to the trouble to paint the interior make all the internal wiring black! tbh I think this case is pointless - get a fractal R3 instead as they're about the same money.Quote

dipzy
The exterior design puts me off big time, especially the front, these are the kind of cases PC World use to sell in their stores 5-6 years ago. Looks too cheap imo, could have been much better.Quote

badtaylorx
seems ok but doesnt live up to the name.....to "one up" an orange haired milla jovavitch takes a lot more than this........

you need to go visit the nameingway!!!Quote

ionicle
its no lian li

but it is a nice looking case...

and for the price, with a bit of tweaking, it could be good, i.e. cut a bigger window and ditch the vents in the current one...

if you did it with say a black watercooling setup, and a black mobo, and graphics....?Quote
Reply