MSI's GUNGNIR 100 is a compelling case, but one that is designed to meet a price point. With a price tag of £99.99 in the UK, this enclosure was created to tick the boxes of most EATX systems, which is a lot to ask given the needs of the EATX form factor. High-end EATX systems will support processors like AMD's Ryzen Threadripper series of Intel's X299 sockets or larger, even so, the MPG GUNGNIR appears to be a capable enclosure.

With the GUNGNIR's pricepoint comes a few caveats, including the case's EATX motherboard support. Yes, EATX motherboards are supported, but only up to widths of 272mm. While this is enough for MSI's CREATOR TRX40 Threadripper motherboard (review here), it will not be capable of supporting wider motherboards. Motherboards that wide are rare, but this is nonetheless a factor that's worth considering given the size of this enclosure.

One of the major selling points of this enclosure is its size, offering users support for large motherboards, long graphics cards and up to seven fans for cooling. Included with the GUNGNIR is four fans out of the box, which includes three 120mm non-RGB fans in the front and a single 120mm fan in the rear. These fans can also be replaced with 140mm models.

When it comes to cooling, this chassis also supports three top-mounted 120mm fans or two top-mounted 140mm fans. Water-cooling-wise, this case can support up to a 420mm radiator at the front of the case and up to a 360mm radiator at to top of the enclosure. This should be enough to cool any system within the GUNGNIR 100. 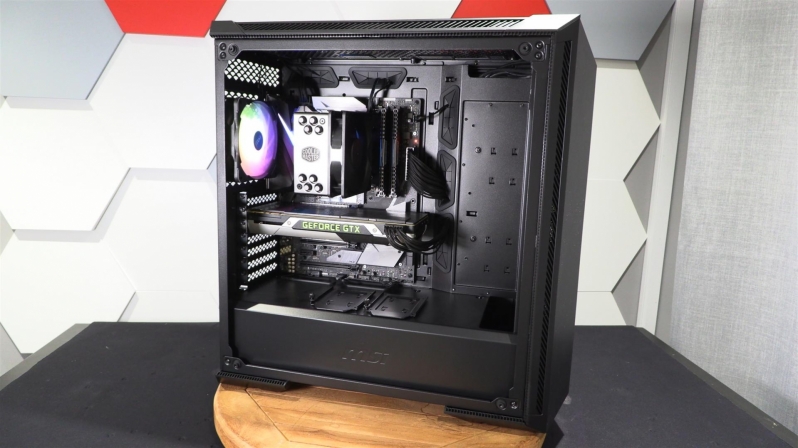 When looking at MSI's GUNGNIR 100, it is clear that this case offers a lot of size for its money, but with this in mind, we also think that this case could have done more with the space available to it. For example, on top of this case's PSU shroud lies two 2.5-inch drive mounts, where there is clearly space for at least three. In addition to this, more drive mounts could have been placed on between this case's motherboard and fans. Likewise, this case could have supported a 420mm radiator at the top of the chassis with a few redesigned elements, or a thicker 420mm radiator at the front with some simple modifications.

With its GUNGNIR 100, MSI clearly designed its chassis to meet their £99.99 pricing target, and as a result, we feel that this case has a lot of room for improvement. While we wouldn't call the MPG GUNGNIR a bad enclosure, we do feel that it has untapped potential that MSI has failed to exploit. As such, we are not as enthused by this case as we otherwise could be.

This is not a full review for the GUNGNIR 100, as the time constraints of CES and other factors have made us unable to conduct full thermal testing and other aspects of our normal case review process. As such, we cannot give MSI's GUNGNIR 100 an award.

With its £99.99 UK pricing, EATX compatibility, the inclusion of four fans at stock, integrated ARGB lighting elements (with expandability) and support for a wide range of water cooling products, we cannot deny that MSI has a lot of offer its users with the GUNGNIR 100. Our only problem with this case is that we feel that a series of small improvements could have made this case worthy of the premium EATX market.

You can join the discussion on MSI's GUNGNIR 100 EATX PC enclosure on the OC3D Forums.