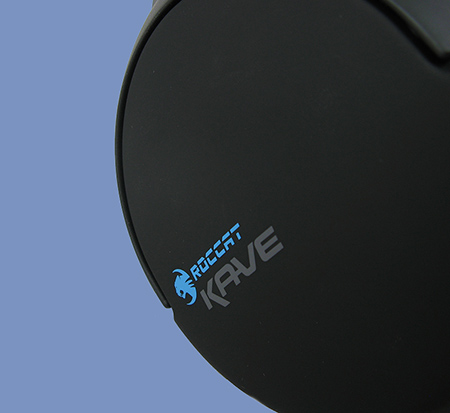 Reviewing headsets is always enjoyable. Rather than spend ages replaying the same level or watching the same benchmark seemingly endlessly, we get a chance to watch some films, make our ears bleed with some music, and actually play games. It might seem small potatoes but when you spend month after month re-running the same bit of Crysis Warhead or driving around the same track, to get a chance to just sit and bash through something is a joy.

So what did we find out from the Roccat Kave?

Probably the most surprising thing was the actual surround. So often because of the, obviously, reduced airspace in a pair of headphones compared to a speaker setup it's nearly impossible to differentiate sound positioning. Anyone who has tried the Virtual Barbershop on Youtube will attest that a well recorded stereo setup can give equal sound direction as an average surround setup. However more and more games are finally catching up with films and giving proper surround. The Roccat Kave, with its separate speaker setup, handles these brilliantly.

Without a shadow of a doubt they give the most spacious surround sound this reviewer has ever heard. Everything from Sherlock Holmes to Up! came through with exceptional clarity and easy definition for our aural compass. Gaming in particular was a delight with the usual battery of OC3D titles, (Shift, Grid, Dirt 2, Crysis Warhead, Modern Warfare 2) being as good as we've heard them. As always our list of benchmark games is constantly scrutinised to find more suitable modern games to punish our hardware with and Battlefield Bad Company 2 shone to the point it's almost a cert to appear in future testing.

If you're looking for headphones for the surround, stop now because you've found them.

Now don't think for a moment that the brilliance of the surround is the be-all and end-all and the rest has been compromised to provide epic sound at such a low price.

Build quality is nothing short of spectacular. The Roccat Kave is finished in a lovely soft tactile matte black. The headband is made of very thick solid metal and gives a satisfyingly smooth slide when adjusting the size, without ever moving unintentionally. Everything about them screams quality. It's rare to find a collapsible headset that still feels utterly robust once "up".

Comfort-wise they are phenomenal. The ear-pieces are very soft and despite the Kave being sturdy and having a certain reassuring heft to them, they aren't heavy on the head and can be, and have been, worn for 16 hours straight without causing discomfort. They grip the head nicely so you haven't got sound bleed and all in all are supremely comfortable for all but the most pencil-necked of individuals.

The microphone is as easy to use, or put away, as any we've come across. It certainly wont move of its own accord which is a claim that can't be laid at the feet of many others we've tested. A small led at the end allows you to see at a glance if it's muted without taking your eyes off your target.

Finally the sound quality, away from the surround aspect, is unsurprisingly brilliant too. Volume is most certainly not an issue as they will go way louder than your humble reviewer finds remotely comfortable without once distorting. Yes here at OC3D we even go deaf so that you get the most honest reviews. Bass is tight and thumping without being muddy or blurred. Mids, and vocals especially, are crystal clear and even the highs are glassy without being harsh.

So if they are this brilliant they must be expensive huh? Well they retail around £70 which, for a headset that does surround sound, wonderful stereo reproduction, is easily portable, great remote volume control and has a clear, removable, microphone is spot on.

Many thanks to Roccat for providing the Kave for todays review. Discuss in our forums.

WelshD1K
Just went to order one but my bank card has expired!!! noooooooooo oh well have to wait a few daysQuote

Had my pair for about two months now and can't say I've ever been so happy with a headset. These things are much higher quality than my Sennheiser PC-350 headset. The sound quality is miles apart, even more amazing considering they costed about 70% of the PC-350 cost at the time.

The only draw back for me is that I find the ear cups to feel a little warm on the ear on extended use (7+ hour sessions)... but those sessions aren't a frequent thing for me.Quote

AMDFTW
are these the same? these say Kave Solid?