Elgato are very much the brand for the streamers in the world, with a whole host of products to assist in getting your scarecam to look as good as possible in the tiny corner of your Twitch stream it occupies. They are a one-stop shop. One product which they really needed to add was a good microphone, and the Wave 3 is a good starting point into the world of 'audio that isn't from your headset'. The importance of good quality audio cannot be overstated, and anyone can tell in an instant the difference between a good microphone and a rubbish one. Many people feel the one on your phone is good, but the moment you compare that audio to something useful you realise it's pants. You owe it to yourself and your viewers to project your voice clearly.

The Elgato Wave 3 enters an already crowded marketplace with models like the HyperX Quadcast and Razer Seiren X occupying the same space as the Wave 3 - USB, by a company known for gaming products - but also one that has a lot of hardcore audio companies too. Rode, Sennheiser, Shure et al, as well as some like the Blue Yeti which are aimed squarely at this segment of the market. Needless to say the Wave 3 is up against some very stiff competition.

So what does it bring to the party that makes it stand out from the crowd?

If you're not used to looking at microphone specifications then allow us to walk you through them. The Capsule is the item that converts your sound waves into electronic ones. Sizes vary wildly but around an inch is where the professional quality stuff usually is. 25.4mm. The 17mm Electret capsule in the Wave 3 is the same brand as you get with the Rode NT-USB Mini and many other microphones of this style. For comparison the HyperX QuadCast has three 14mm ones, the Razer Seiren has one 25mm one, and the Strix Magnus also has three 14mm ones. So this sits between those three, albeit the Quadcast and Magnus are designed with multiple polar patterns thus require more capsules.

Next up is the polar pattern. This determines which direction the microphone is expecting sound, and in vocal microphones the most common by miles is Cardioid. Imagine it as a D with the vertical line through the centre of the mic and the curve facing you. The last thing you want is an omnidirectional which picks up sound from everywhere and will drown out your voice with the hum of your case fans or the rattle of your keyboard.

Sensitivity is how quiet a sound the microphone will pick up, with numbers nearer to zero being better than larger negative ones. To continue our HyperX/Razer comparison the Quadcast is -36dB whilst the Seiren and Magnus are -35dB. Lastly the the SPL is how loud you can get before it distorts. The Wave 3 gives us two numbers here, with and without the clipping guard. Given that the microphone clipping is built and you can't turn it off, we'll take the 115dB as the actual number. The HyperX and Magnus don't reveal this number, the Razer is 110dB and the Blue Yeti is 120dB. So that's the USB models taken care of and the Wave 3 sits in the middle. We'll also just mention the Rode NT1-A which has a ceiling of 137dB. That will become important later. 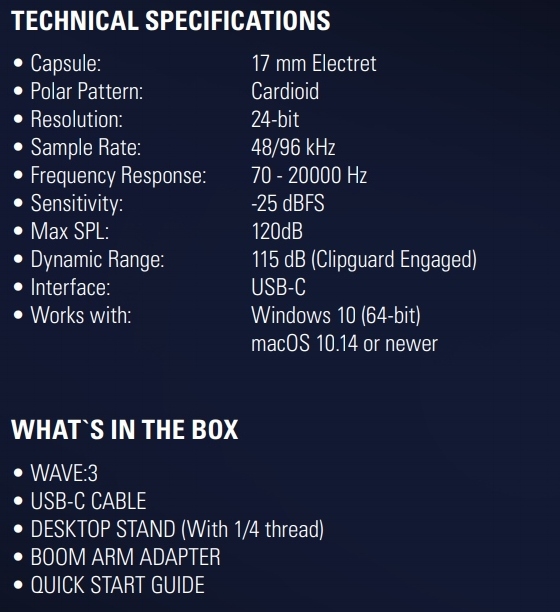