The Corsair Void range of headsets proved very popular, giving a good balance between cost and performance. It wasn't exactly Corsair's first foray into the world of audio solutions, but it was their first concerted (ha!) effort to provide a usable, affordable, headset and one that had a wireless model for those of us who despise having a cable draped across our chests like some braided seatbelt.

If you will forgive us a momentary diversion from the main review we think that wireless is the stealth technology of recent years. We don't mean that you can't see it so it's stealthy, obviously, but rather that it is something which has improved tenfold over its early incarnations yet doesn't get the plaudits and column inches that it might deserve. It wasn't that long ago that latency was so poor that any time a manufacturer had created a product which very nearly got the same response times as a wired model it was worthy of fanfare. Now we just assume that anything wireless will work just as briskly as its wired counterpart and just take the need to recharge as something we accept. The boffins have quietly solved the issues of wireless technologies until we have responsive hardware or high bandwidth networks without a second thought.

Whilst the technical challenges of wireless might be considered a solved problem, there is an inherent cost to them that isn't applicable to wired solutions. The need for a battery and a method of charging, as well as a way to track its given charge, coupled to the sending/receiving system all add up to make even the most spartan wireless solution be one that is considerably more expensive than its cabled cousin. Thus when we saw the MSRP for the Corsair HS70 - $90 at time of writing - we were surprised to say the least. Wireless Headsets rely on three key elements, sound quality, build quality and wireless performance. Surely putting out a headset at a price more in keeping with a midrange wired effort meant that a compromise had been made somewhere? Let's discover where, if anywhere, that is.

We've seen a few headsets recently which have adopted a broader frequency response. Instead of going for the 20Hz-20kHz response that is so common amongst gaming headsets, we've tested some 20Hz-40kHz models and found them to have a much more spacious sound. Given the pricing of the HS70 we aren't at all surprised that it only has a 20Hz-20kHz frequency response, but the use of 50mm drivers should help assuage the missing higher frequencies. If these numbers mean nothing to you then don't worry, the average human ear can hear 20Hz to around 22kHz so unless you have particularly acute hearing it's more about getting headroom than anything else. Careful tuning of the sound profile is more important than gaudy numbers, although obviously full HD audio has its place. 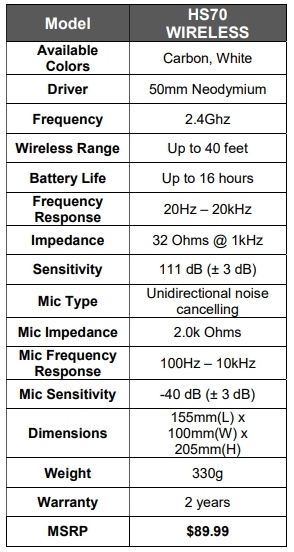 Dicehunter
The detachable mic is a huge selling point for me as I use the Void Pro's every day and the mic does get in the way, I'll have to pic this up at some point.Quote

TheDuke
Thanks for the review Tom, I gave up on gaming headphones a long time ago I have bought to many high-end so called gaming headphones and was always disappointed with the sound and comfort, in the end I decided to buy a modmic 5, this would give me the best of both worlds the use of my beyerdynamic dt 990 edition 250 ohm headphones and the use of a detachable MIC, saying that I was still not impressed with the comfort levels and had to change the default ear-pads as they where to hard even after wearing them for a few weeks to more comfortable one after much research I decided on the Dekoni Audio Elite Sheepskin Leather Ear Pads, for comfort and longevity. I also changed the memory foam out of the headband and replaced it with super soft latex foam.I am very happy with the results

fadingfool
And I'd just paid out for a set of Wireless Void Pro's..... Oh well at least the lights (that I can't see when wearing them) match the rest of my set up.Quote
Reply