We have been gaming for so long that audio and graphics are undoubtedly the two elements that have changed most in our time. Graphics are clearly divided into the pre and post 3D acceleration eras, but the changes in the world of sound have been more subtle.

Initially computers and most consoles could do little more than beep. Then we had MIDI audio, before finally reaching things would would count as music to all but the most pedantic person. Getting to hear these noises relied on stereo speakers, usually cheap and tinny things that sat either side of our heavy CRTs. That quickly gave way to speaker setups with subwoofers and then surround audio. Following that a curious thing happened. As online gaming became something which was easy to get into with internet connected consoles and games with dedicated lobbies, so the headset quickly rose up to become the weapon of choice for almost everyone. The combination of being able to limit what you hear just to yourself rather than everyone in the room, as well as usually being equipped with a good microphone solved all those communication needs in one fell swoop.

Now headsets are such a key component that both PCs and consoles are designed to let you connect quickly. All three current gen consoles have headphone jacks either built into the controllers or the console itself, without requiring any adaptors as they usually did on the previous gen. So what do you do if you want a headset which can fit into all your devices but you haven't got the finances to invest in a premium product? You turn to today's review, the Corsair HS35. A very affordable headset which is compatible with anything that has a 3.5mm jack. 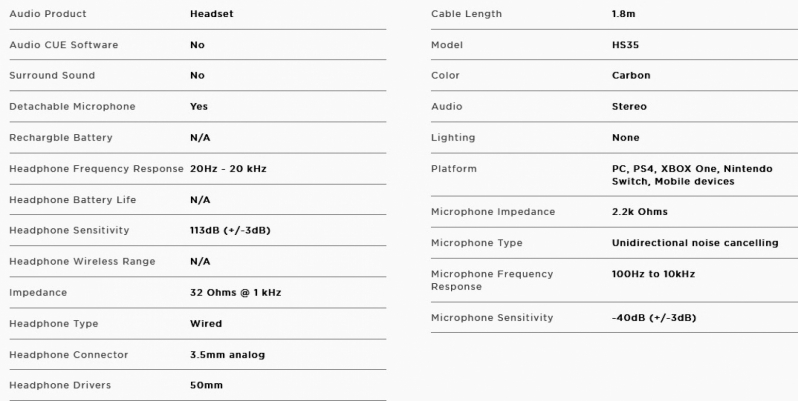