Before getting stuck into this review, I want to take you back in time with me for a moment. It won't take long I promise...

Prior to the early 1990's, PC's had little capacity to output sound beyond basic beeps. The sound card as we know it was popularised by Creative Labs at the start of the 90s with its range of Sound Blaster products. The SoundBlaster became a de- facto standard for amateur audiophiles, gamers, and home users, and was quickly emulated by other hardware manufacturers. The product line has continued to evolve, but other manufacturers have also come and gone and subsequently been swallowed by Creative. Hardware manufacturers like Terratec, AOpen, Hercules, Philips, M-Audio have all either fallen by the wayside or vanished into total obscurity.

For a while the sound card market appeared to stagnate, until an innovative manufacturer named Auzentech arrived on the scene. Within quick succession, Auzentech released sound cards that began to reinvigorate the market...namely the X-Plosion, X-Mystique and finally the X-Meridian. Utilising alternative C-Media chipsets, Auzentech began to secure a solid following and fan-base for both their quality, performance and innovation.

Auzentech's X-Meridian sound card also had the dubious honour of going head-to-head with Creative's latest offering...the Creative X-Fi. However, Creative seemed to be having a change of heart from their attitude of the past and were having a change of direction. Last year the PC enthusiast community began to hear rumours that Creative were going to begin licensing their audio chipsets. Whether Auzentech's surge in popularity had anything to with this is purely speculative, but I would be prepared to wager on it.

Subsequently, Auzentech were given the license to start producing their own range of X-Fi based sound cards and the rumour mills were buzzing with excitement at this interesting collaboration. As the days to release were ticking down, news was rapidly spreading that the Auzen X-Fi Prelude was shaping up to be something very special, and free of issues that plagued Creative's X-Fi based cards.

Today I have been given the honour of reviewing the Auzen X-Fi Prelude 7.1 sound card, and I can safely say that it has been well worth the wait. But don't take my word for it, take a look at it yourself... 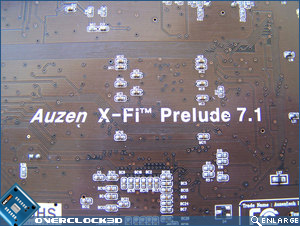 The Auzen X-FI Prelude 7.1 specifications look very good on paper, but just how well these equate to real-world performance we'll see later in the review. But for now, let's turn the page to see what you are actually getting for your money...
«Prev 1 2 3 4 5 6 7 Next»

Looks to be a solid card.Quote

FarFarAway
Looks like a decent card, if only they didn't have to use Creative drivers tbhQuote

SuB
i can certainly vouch for it

i have one and i love it

Rastalovich
Quote:
Seeing as it`s software is creative hybrid, I wonder if u can use the THX console that creative have on their cds ?

For me, these cards are equivilant to how an nVidia reference card gets adopted by other manufs.

Talking about the population of a creative card in comparison to this one, it`s also fair to bare in mind that out of the 5 or 6 creative x-fi cards that have been/are available, ranging from the cheapest to the professional studio ones, the density of the surface mounting goes from sparce to crazy-mad-caps-per-inch.

I would have liked to have seen a "crackle-test" on this card too, creative cards get easily bogged down fighting for internal bus usage (so it would appear but not confirmed) which makes them crackle. It`s a mad test to emulate, and it`s conditions are not 100% duplicate-able. But if u have a pc thrash at something like fah on all cores, do some rar`ing, do some massive file transfers..... and play some music - u get crackle on a creative x-fi. Maybe this is more a blame of the mobo design, or windows design, but it would be interesting.

Crackle test - would have been interesting you're right

And yep, lets hope some PCI-e versions get out real soonQuote
Reply