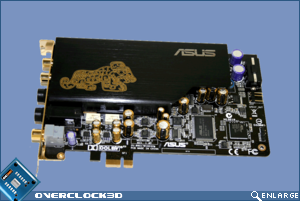 The PC Soundcard is a market that has been dominated by Creative up until fairly recently. Creative is a monolith seemingly wrapped up in it's own success and any innovation seems to come at the cost of quality.

This is where Asus steps in with their Asus Xonar Essence STX. Despite its long and convulted title, this card may be just be what the PC sound-card market has been waiting for - a proper SOUND card. You may be wondering what I am saying by that. Let's see what Asus say about it:

"Story behind the Masterpiece
Thousands of years ago, our ancestors crystallized their knowledge of the materials and music into the Chime of Tiger, one of the first audio masterpiece in human history. Gold-plated on the EMI shield, the Chime of Tiger totem not only represents Xonar teams new footnote in audio innovation, but also mankind's endless pursuit of the Essence of Sound."
Now what I really want to draw your attention towards is the last bit. Asus are after the "Essence of Sound" in this card. This is a card aimed at those who want excellent quality sound for music. It's not aimed at gamers and not at cinema buffs. It's aimed at those wanting to get the most out of their PC music collection. This is a good thing in my eyes. Sure you can grab an X-Fi and see how it does with music. I'm sure it would be perfectly adequate, but there's no mainstream cards that really do the trick with music.


A pretty beefy set of specs there with the most obvious omission being DTS decoding which is a little suprising. Note that the Dolby processing should convert the signal to 5.1 in this case, but I will be testing this.

Diablo
Nice review, but linky is to quad sli forum not this 'un.

Given the price, it looks like it would go great with my shure se530s, but if I'm sitting at my desk I prefer speakers.

FarFarAway
I prefer speakers too, which is why I hooked it up to my AV receiver

Great card and personally I don't see it as a niche product per se, it's got all the connections you'd need to use with a decent speaker system (inc digital out)Quote

Diablo
I suppose I prefer a normal 7.1 wired on 3.5mm jacks rather than needing a separate amp etc.

I guess if you have higher end audio its great, but for £120 I would go for the D2X. I suppose its aimed at music listeners rather than gamers so its better in that respect. Considering my only really high quality headphones are the shures (~£250) its not worth it just for those.

Its all a matter of what you want from the card and if you want really nice sounding music and have a good av kit, this is definitely the card to go for.Quote

JN
Nice review mate and yes that card does indeed rock. Had one in my system for a month or so now and I just could never go back to an X-Fi or whatever now.Quote

Luigi
How does it compare to the normal asus cards, does anyone know?

And kempez, the forum link at the end links to quad sli review...Quote
Reply