Will it run on Steam Deck? Valve Checking and Verifying their entire Steam Library

Valve's Steam Deck handheld gaming PC is due to be released this December, and they are making sure that their Steam platform is ready for launch. Valve is currently reviewing their "entire Steam catalog" to test the compatibility of their Steam Deck system, allowing them to rate games into one of four categories.

The Steam Deck may be a gaming PC, but it isn't a Windows PC. Valve's Steam Deck uses a Linux-based OS, using a compatibility layer to support Windows-optimised PC titles. This means that some PC gamers will not be compatible with Valve's Steam Deck.

Below are Valve's four categories of Steam Deck Compatability

These games are playable but may require tweaking to achieve optimal results. Settings may need manual tweaking to support Steamdeck, or workarounds may need to be employed to allow the game to function.

- Unsupported games will not run on Valve's Steam Deck system. Future game/Steam Deck updates may allow these games to be supported, but as it stands these titles cannot be played on Valve's handheld gaming PC. One category of unsupported titles is VR games.

Valve has not tested these games for Steamdeck Compatability 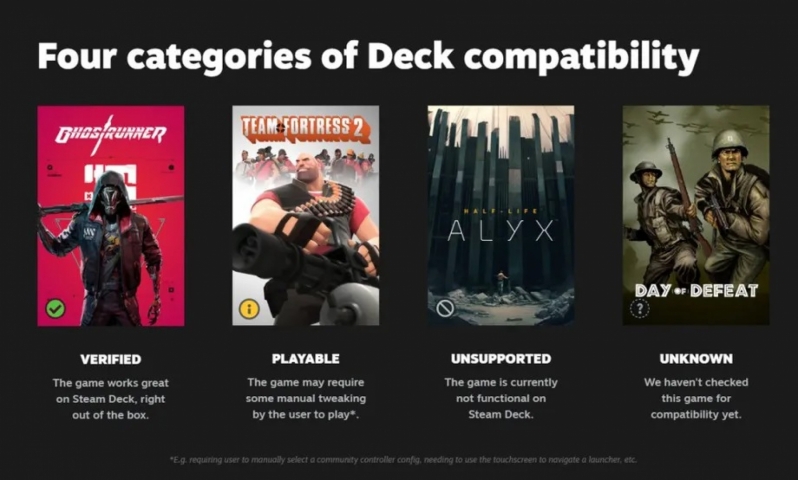 These testing efforts from Valve will allow Steam Deck users to see if their favourite games will be compatible with Valve's gaming handled without testing the games themselves. On top of that, this effort sends a message to developers that unsupported games will be marked as such on Steam, acting as a negative mark for non-Steam Deck titles.

The video below from Valve explains how the company's game verification system works.

You can join the discussion on Valve's Deck Verified compatibility indicator for PC games on the OC3D Forums.

Deceit
Hopefully this improves overall support for Linux gaming. Would much prefer to switch all my systems to Linux if I could.
I've one of top models ordered but expected Q2 22.Quote
Reply