Valve disassembled their Steam Deck, so you don't have to

Valve disassembled their Steam Deck, so you don't have to

Valve's Steam Deck handheld gaming PC will be released later this year, and would-be customers are already considering how the console can be maintained or upgraded over time.

Valve has released a video where they disassemble one of their Steam Deck handhelds to answer some questions regarding user serviceability. This video shows users how they could replace the joysticks and SSD within the system. That said, Valve does not recommend opening the system or performing any hardware upgrades.

Below is what Valve has to say about the Steam Deck's replaceable components and user upgrades/replacements;

One of the most frequently asked questions we've received about Steam Deck is about the components inside it, and whether they're replaceable or upgradable. The answer is a bit more complicated than just a yes or no, so we've made a video to explain all the details. Spoiler alert: we DON'T recommend replacing parts yourself, but we still want you to have all of the relevant information about Steam Deck's components.

While users can replace the Steam Deck's analog stick and SSD, Valve does not recommend replacing parts of their handheld. While Valve has designed their Steam Deck systems to be user upgradable/repairable, there are many reasons why consumers should not disassemble their Steam Decks.

For starters, the plastic casing of the Steam Deck and many of its screw mounting locations can be easily stripped by users, making the system harder to re-assemble. Secondly, the system's casing is said to be weaker if the console is opened up and re-assembled. This process is said to make the console less drop resistant and that the system's structural integrity is reduced. Beyond that, users could damage their systems through a static electricity discharge or damage their Steam Deck's battery. The latter of these has potentially explosive results, so at a minimum, Steam Deck disassembly should be done carefully.

Valve has also warned users about SSD upgrades. Valve has stated that they carefully selected the Steam Deck's SSDs to prevent the system's integrated storage from interfering with their WiFi solution. 3rd party SSDs may not meet the same standards as Valve' chosen SSDs, and could potentially interfere with the Steam Deck's WiFi support. Beyond that, only 2230 sized M.2 SSDs fit into Valve's console, and that size of SSD is uncommon. Valve recommends using the Steam Deck's SD card slot to expand the system's storage.

Is the Steam Deck repairable?

The short answer to this question is yes. Steam Deck users can open up their Steam Deck systems to replace components if necessary. This is a big win for users who believe in their right to repair their computers.

Valve says to "Stay tuned in the coming months for a source for replacement parts: thumbsticks, SSDs, and possibly more." That means that replacement components for Valve's Steam Deck should be readily available, which is great news for those who will inevitably wear out the Steam Deck's analog sticks. Note that the Steam Deck's CPU and memory are not user upgradable. Both are soldered onto the system's motherboard, just like all compacted laptop-style PCs.

You can join the discussion on Valve's Steam Deck disassembly video on the OC3D Forums. 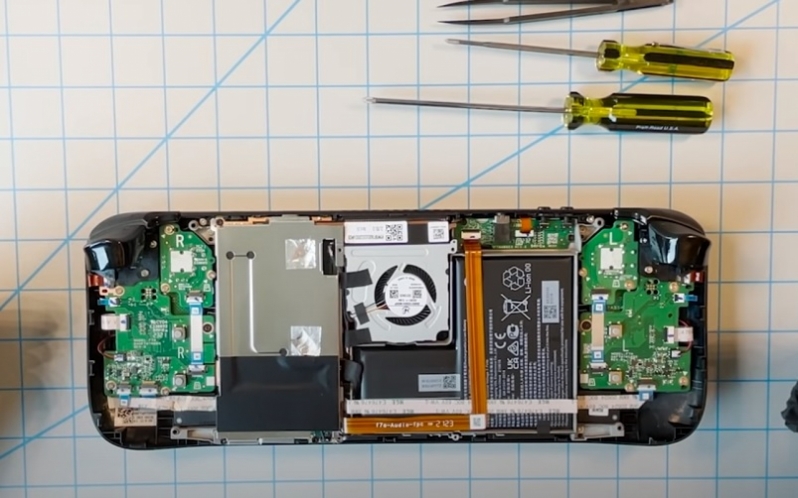 dazbobaby
You just know iFixit was going to tear it down, but Valve? Who next, Apple tear down iPhones?


Don't be stupid Daz, Apple have no idea how to do that.Quote

hmmblah
I love the direction Valve is taking with this. I won't buy it at launch, but I'm sure I'll snag it shortly after. I have a friend who pre-ordered so I'll at least get to give it a try before buying.Quote

Deadtroopers
I'm sure Louis and Steve will be suitably impressed... Especially by the anti-static bracelet OVER the glove. VERGEing on the redeculus that!Quote
Reply