The 'Mad Box' will soon need a new name

Slightly Mad Studios revealed their "Mad Box" console plans at the start of 2019, promising to deliver "the most powerful console ever built", with plans to ship the system in around three years, placing the system in a 2022 timeframe.

When the system was first announced, the "Mad Box" name was used when referring to the company's planned console, with Slightly Mad filing a trademark for the name on January 3rd with EUIPO, one day after the system's reveal.

Now, the "Mad Box" trademark has been abandoned, with Slightly Mad withdrawing their trademark application on April 5th. This happened because a French gaming company called Madbox filed an opposition to Slightly Mad's trademark, stating that there "exists a likelihood of confusion on the part of the public".

At this time it is unknown what Slightly Mad will call their next-generation console platform, which Slightly Mad's claims to be "beyond next gen" in terms of hardware capabilities. Right now it seems likely that Sony's PlayStation 5 will release in 2020, a release timeframe which will make Slightly Mad's release around two years after the PS5, assuming that the studio's 2022 release window is met.

Below is Slightly Mad Studio's latest concept design for the "Mad Box". 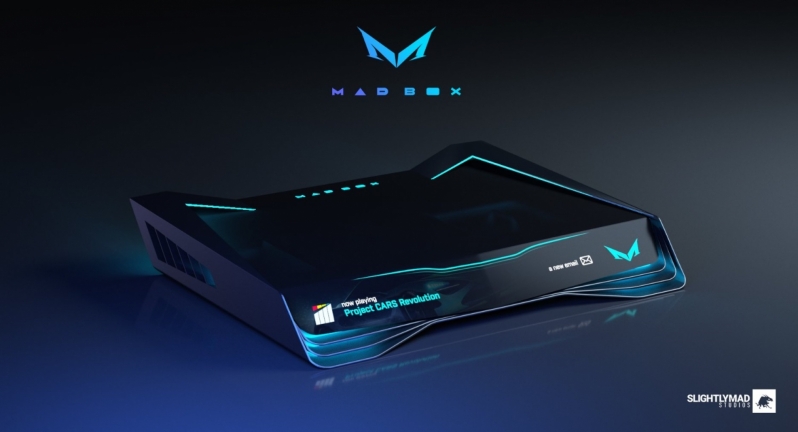 Right now it is unknown whether or not the Mad Box console will ever make it to market, as right now Slightly Mad Studios appears to be in talks with hardware manufacturers, making the company's performance boasts little more than performance targets. That said, with "3.5 years" of development time Slightly Mad has plenty of time to create a powerful new console, perhaps enough time to surpass the PlayStation 5 and Next-Gen Xbox.

Ian Bell confirmed that Slightly Mad Studios already has multiple investors that are offering the required funding to see the company's console dreams to their fruition, revealing that their new console will be “competitive with upcoming console prices.” Slightly Mad doesn't plan to take as large of a cut from console sales as other manufacturers, which should allow the console to ship with an attractive price point.

You can join the discussion on Slightly Mad Studio's abandoning their "Mad Box" trademark on the OC3D Forums.