Samsung has reportedly paused Galaxy Note 7 production, with several networks no longer exchanging or halting all sales over safety concerns. The company has reported that they are "adjusting the production schedule to ensure quality and safety matters".

This comes after several reports of replacement, post-recall, Galaxy Note 7 phones exploding or catching fire, prompting the US networks AT&T and T-Mobile to already stop replacing or selling new devices.  Below is a statement from T-Mobile.

While Samsung investigates multiple reports of issues, T-Mobile is temporarily suspending all sales of the new Note 7 and exchanges for replacement Note 7 devices,

Last month Samsung confirmed that the Galaxy Note 7's overheating issue is caused by a rare manufacturing error which allows the battery's anode and cathode (positive and negative electrodes) to come into contact. This allows the mobile to discharge its battery very quickly into itself, causing a large amount of heat build up which causes the phone's lithium-ion battery to catch fire. 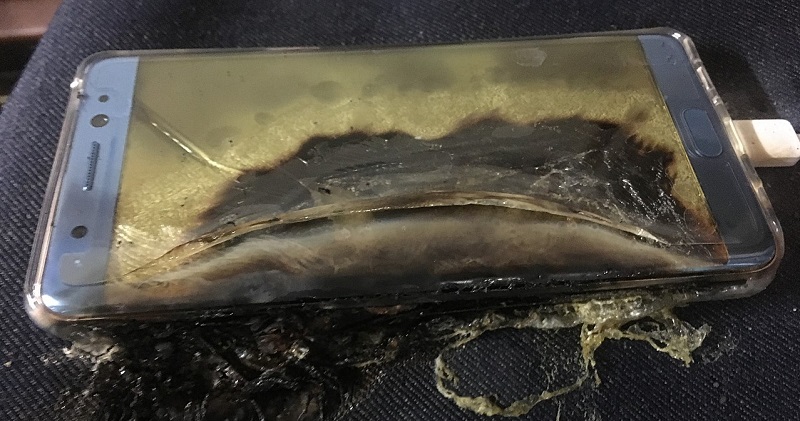 At this time it looks like Samsung may need to issue a recall for all Samsung Galaxy Note 7 phones, recalling a product which has already been recalled over safety concerns. Issuing two recalls on a single product line will be a major blow to Samsung's reputation.

Now it seems that the Galaxy Note 7 will never shift its reputation as an "exploding phone", with the Taiwan Consumers Foundation already urging Samsung to suspend all sales of the New Galaxy Note 7.

You can join the discussion on a Samsung Galaxy Note 7 halting Note 7 production on the OC3D Forums.

Kushiro
That pic reminds me of commercials about cigarettes.Quote
Reply