It may look like its predecessor, but a lot has changed under the hood

It's official; Razer is making a successor to their popular gaming smartphone, which hit the mobile gaming market by storm this time last year. Meet the Razer Phone 2, a new phone that is designed to offer users improved performance levels, a brighter screen and higher fidelity speakers.

Performance-wise, Razer has upgraded the SOC that powers their gaming handset, utilising Qualcomm's Snapdragon 845 processor alongside 8GB of system memory, ensuring smooth multitasking while offering a vapour chamber based cooling system and a large 4000mAh battery for power.  Razer claims that this phone can offer 2.8GHz clock speeds, which is an impressive feat for a smartphone.

Screen-wise, Razer continues to use a 120Hz 1440p IGZO display, though as we have said before this screen has been updated to offer higher brightness levels and provides support for HDR content. Razer's 120Hz display delivers both 120Hz touch and a 120Hz refresh rate, unlike Apple's latest iPhone models, which only offer high refresh rate touch functionality. 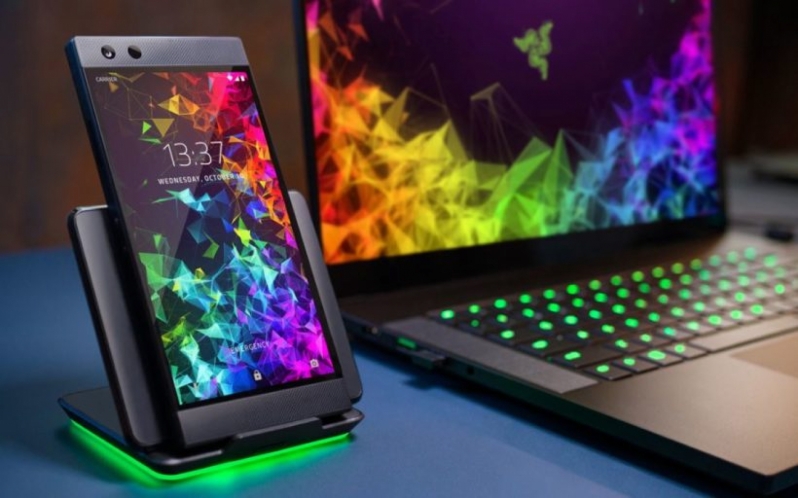 Like its predecessor, the Razer phone's screen is placed between two stereo speakers, which are designed to offer users a high-quality audio experience, with the phone offering users a 24-bit USB audio DAC for use with external speakers. The Razer Phone supports USB Type-C connectivity but provides users with a USB to 3.5-inch audio jack in the box.

Another notable upgrade over the original is the Razer Phone 2's IP67 certification, which certifies that the phone is water resistant for up to one meter, an astounding feat given the size of the speakers on this device.

Below are the full specifications of the Razer Phone 2, which will ship for $799 in the US and £779 in the UK. The phone will ship with Android 8.1 but will be updated to support Android 9.0 in the future. The Razer Phone 2 will be available later this month in the UK. 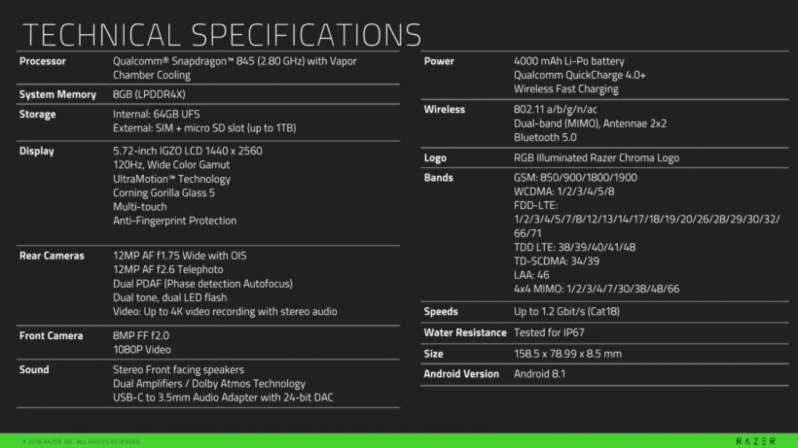 You can join the discussion on the Razer Phone 2 on the OC3D Forums.

Dicehunter
And here I am with my Moto Razr flip phone from 2005, Still don't like smartphones.Quote

demonking
Want!
Hopefully we get this on more networks this time round.

* Three only again in the UK for contract

can't stand 3, they're network in the UK is like their customer service, useless

WillSK
Quote:
I love my Pixel 2 XL and I like the Pixel design language (2 tone back, muted colours, clean lines etc.) but from a hardware perspective I am so so disappointed by the 3 XL.

I know Google like to preach the software message and I'd agree their software is nice and clean for the most part, but a company like Google shouldn't use that excuse to justify a relatively mundane hardware package.Quote

NeverBackDown
Quote:
Exact same boat as you. P2XL I love. The new 3XL however... so bland. Newer cpu, same memory, smaller battery, hardly new features, and price went up. For what? Nothing changed except a new CPU. Everything else is the same or worse!
I got my P2XL about 3 months ago through google for $250 off plus my Nexus6p trade in. Was well worth it. I am definitely not interested in the new phone. Especially with the 2 year warranty and 3 years of OS/Security updates. No real reason too.Quote
Reply