Razer has revealed several new versions of their Blade 15 notebook, adding options for both 4K OLED screens and 240Hz 1080p panels. On top of this, Razer has also allowed their users to purchase systems with Intel's new 9th Generation processors, offering up to an Intel i7-9750H processor within their system.

Intel's new i7-9750H offers users six cores and twelve threads while delivering users a base clock speed of 2.4GHz and a boost clock speed of 4.5GHz. Alongside their new 9th generation processors, Razer is also offering users a new WiFi 6 networking solution, which can support up to 2.4Gbps transfer speeds.

On the display side, Razer offers users the ability to use either a 1080p 240Hz display, rather than the 144Hz display that's offered on existing Blade 15 models, or a new 4K 60Hz OLED display, which ships with support for the full DCI-P3 colour space and is HDR 400 True Black certified. With their latest Blade 15 models, Razer is offering users the best quality pixels, or the fastest possible notebook refresh rates.

Razer's Blade 15 will be one of the first notebooks on the market to offer an OLED display, providing some of the highest levels of image detail around thanks to the deep blacks and high contrast levels that are offered by OLED display panels.

Like Razer's other Blade 15 models, the company is offering users the ability to purchase their new Blade 15 versions in both the company's standard black/green aesthetic and in "Mercury White" which offers purchasers a more sleek and subdued aesthetic. Razer's "Mercury White" models are designed to better cater to those who prefer a more professional aesthetic, or simply want their Razer to look more like a MacBook. 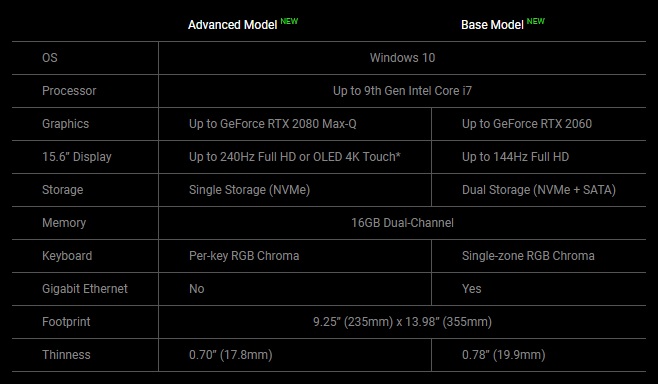 You can join the discussion on Razer's new Blade 15 models on the OC3D Forums.