PCSpecialist Launches Their "Gaming PC Of The Month" Initiative

PCSpecialist Launches Their "Gaming PC Of The Month" Initiative

PCSpecialist is starting 2019 with a bang, launching their "Gaming PC of the Month" initiative, which will allow consumers to purchase a gaming PC at a reduced price. The PC in question will change every month, with PCSpecialist starting off with their FUSION RX series system, an ALL-AMD gaming juggernaut.

With this PC, PC Specialist is offering a discount of £120, with the only sacrifice coming in the form of customisability. Yes, you can still customise the software configuration (OS) and warranty options of this PC, but you will not be able to change PCSpecialist's component selection. Removing this system's hardware variability helps PCSpecialist built this PC in large quantities, a major factor that helps reduce the PCs cost.

January's PCSpeicalist Fusion RX system will ship inside a Corsair Carbide 275R chassis and have a Ryzen 7 2700X processor at its core, using 2x8GB (16GB total) of 2933MHz DDR4 and an 8GB RX 590 graphics card to power through most gaming workloads. On the storage side, this system will also ship with a 256GB ADATA M.2 NVMe SSD and a 2TB Seagate Barracuda HDD.

On the aesthetics side, PCSpecialist will ship their FUSION RX systems with two 50cm RGB LED strips and configure their Corsair Carbide 275R with a tempered glass side panel, allowing all of the system's components and lighting features to be viewed from outside the chassis. 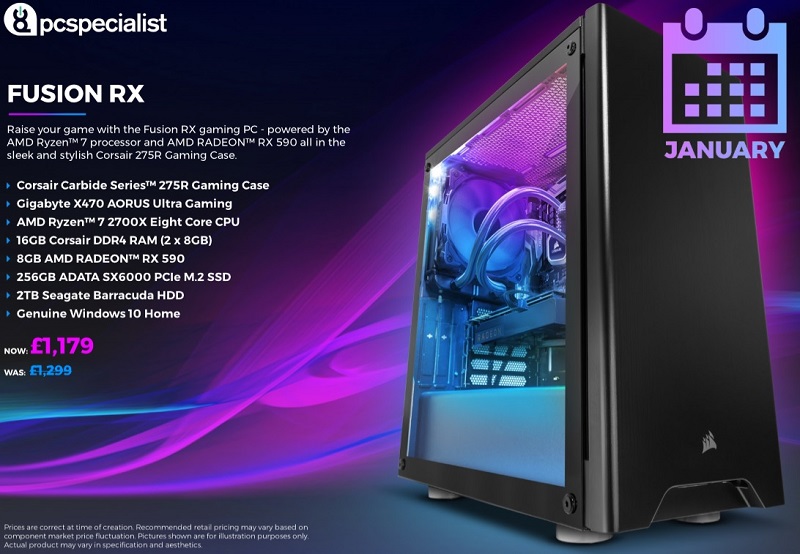 For £1175 PCSpecialist seems to have created a very capable system, one which will come with free copies of Tom Clancy's The Division 2, Devil May Cry 5 and Resident Evil 2 (2019 remake) thanks to AMD's latest raise the game bundle.

To have a look at PCSpecialist's Discounted "Gaming PC of the Month", you can view it now on the company's website.

You can join the discussion on PCSpecialist's discounted "Gaming PC of the Month" series on the OC3D Forums.