Two years ago Overclockers UK released a staggering new system called the OrionX, the most powerful PC that their resident Overclocker 8PACK can produce, shipping for £24,000 at the time of its release.

A lot has changed in two years, giving 8PACK and opportunity to create a successor to his insanity-grade PC. Turing has arrived, X299 has entered into the fray, and Intel's desktop range has moved from having four cores to eight cores, delivering more than enough room for a substantial PC upgrade.

It's time to introduce the ORIONX2, a system that costs a staggering £32,999.99, with room to increase further in price thanks to several potential hardware upgrades. 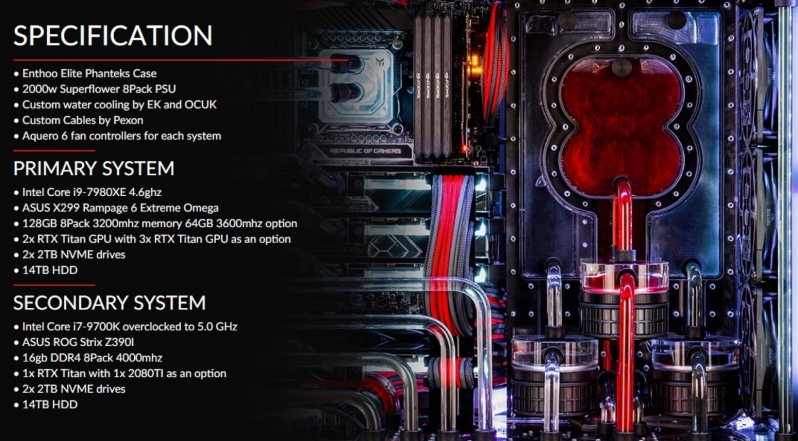 On the storage side, this system contains four 2TB NVMe across both systems and two 14TB HDDs for secondary storage. Every overclockable component when this system will ship with the highest overclock possible on pre-binned components, all of which are tuned for peak performance at low voltages to ensure longevity.

Owners of these systems will be able to contact 8Pack in the event of technical issues, giving owners a direct line to their system builder to help resolve any potential issue.

To say this least this system is ridiculous, absolutely bonkers and is certainly not a system that will offer most consumers anything resembling value for money. This is a showpiece, a system that Overclockers UK can use to assert their supremacy in the custom-PC market.

This PC comes at a price point which is bank-breaking and with performance levels that are simply irresponsible, containing the most premium hardware available today, coming with professionally tuned overclocks and in a package that is a premium in every sense of the word.

The 8Pack OrionX2 is not a system that we would recommend to anyone, though it is certainly a system that is worth considering if you manage to win the lottery or marry into a Royal family.

You can learn more about 8PACK's ORIONX2 system here.

AlienALX
Put me down for two.Quote

WYP
Quote:
Yeah, basically 8PACK will do his best to get the highest clocks out of each chip. They are already binned, but some systems could be higher, perhaps 4.7.

His description was that he used the "cream of the crop" when it came to CPUs, so they all don't need too many volts and will retain their overclocks for ages.Quote
Reply