Microsoft has confirmed that it's Surface Duo Dual-Screen Smartphone will launch on September 10th for $1399, with pre-orders starting today in the US.

The Surface Duo is Microsoft's first Android-powered smartphone, which utilises custom modifications to the OS that enable dual-screen utilisation. This change enables increased productivity and delivers a true multi-screen experience for smartphone users.

Given the folding nature of the device, the Surface Duo only requires a single camera, which can be used for photography, video calls and more. The camera is 11-megapixel f/2.0 model and features a "super zoom" of up to 7x and the ability to record both 4K and 1080p video at 30 FPS and 60 FPS.

The purpose of the Surface Duo is to enable increased productivity on the go and to expand Microsoft's hardware ecosystem into smartphones once again. This device will expand Microsoft's already popular Surface line, and help increase the versatility of Android devices.

As an Android device, the Surface Duo can operate any Android application without any modifications. This mitigates one of the major downsides of Microsoft's Windows Mobile OS, which lacked app support. Microsoft has already tweaked its Android apps to take full advantage of the Surface Duo's unique feature set, and Amazon has worked to make its Kindle app provide a more book-like experience across the device's two screens.

You can join the discussion on the release date of Microsoft's Surface Duo Smartphone on the OC3D Forums. 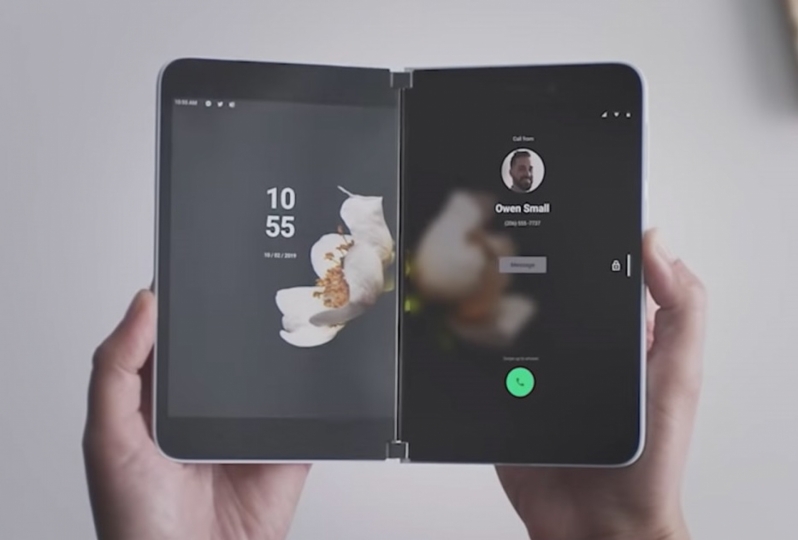 Dicehunter
I think that this design is much better than a physically folding screen which shortens the lifespan of a device and can introduce a fair few issues.

Oh and a little spelling mistake at the start -

"As an Android device, the Surface Duo can operate and Android application"Quote

Warchild
I just dont see a market for them. Its still too big for a pocket when folded. And when unfolded, resembles an Ipad mini

For the price I can think of a plethora of better valued devices.Quote

demonking
Quote:
Still cheaper than the majority of 2080ti's


Quote:
you underestimate the power of marketing these days, give one to a few celebrities and insta influencers for free and it'll sell by the bucket load. Just look at Apples most recent YouTube ad campaign, it is literally pictures of famous people using there products, nothing else, and how out of touch and un-cool you are that you don't have one....Quote

Dark NighT
Quote:
It works like a charm that tactic, that's all apple needs to do, is make people feel silly for not having one like their favorite famous person has one and kaching!


Not a bad looking phone that, just a bit to wide imo.Quote

Warchild
Quote:
Then why has the samsung flip phone and samsung fold been a total flop? The concept is great. I was testing the fold for some weeks last year, but it was a massive inconvenience. When folded in the pocket, its bulging size made even walking a discomfort. Given its glossy effect, you could not place this in a bag or other container as it impacted the finish. The screen choice was an annoyance, as was the crease. At least MS accepted that a single screen was a flawed idea and went with two separate ones, but unless you can push out a massive amount of apps that utilise dual screen, I think this will be such a niche market, it won't even get a second derivative.Quote
Reply