Microsoft has just confirmed a lot of the specifications of its Xbox Series X console, revealing the exact architectures used in its CPU and graphics processors and several of the new features that are coming to their next-generation system.

For starters, Microsoft has confirmed that they are using an RDNA 2 graphics processor which offers 12 TFLOPS of GPU performance. In terms of raw TFLOPS, this is double what the Xbox One X offers, and more than the peak compute performance of AMD's Radeon RX 5700 XT (which offers 9.75 TFLOPS of peak FP32 performance).

This doubling of GPU compute performance is just the beginning, Microsoft's new Xbox Series X graphics component utilised AMD's next-generation RDNA 2 architecture, which packs increased IPC when compared to AMD's older GCN and RDNA 1 graphics architectures. In simpler terms, this means that each TFLOP of graphics performance on RDNA 2 is worth more than an equivalent TFLOP on GCN-based graphics cards (Xbox One X, PlayStation 4 Pro) and RDNA 1-based graphics cards (AMD RX 5700 series). As it stands, AMD doesn't offer a graphics card this powerful within the PC market.

Next up we have Microsoft's new Zen 2-based CPU, which is due to deliver a major leap in CPU performance over the Jaguar-based processors on the Xbox One S and Xbox One X. These processors will offer Microsoft higher clock speeds, larger caches and increase performance per clock. This is where Microsoft will see a true generational leap in system performance, a factor which will allow games to become a lot more complex. 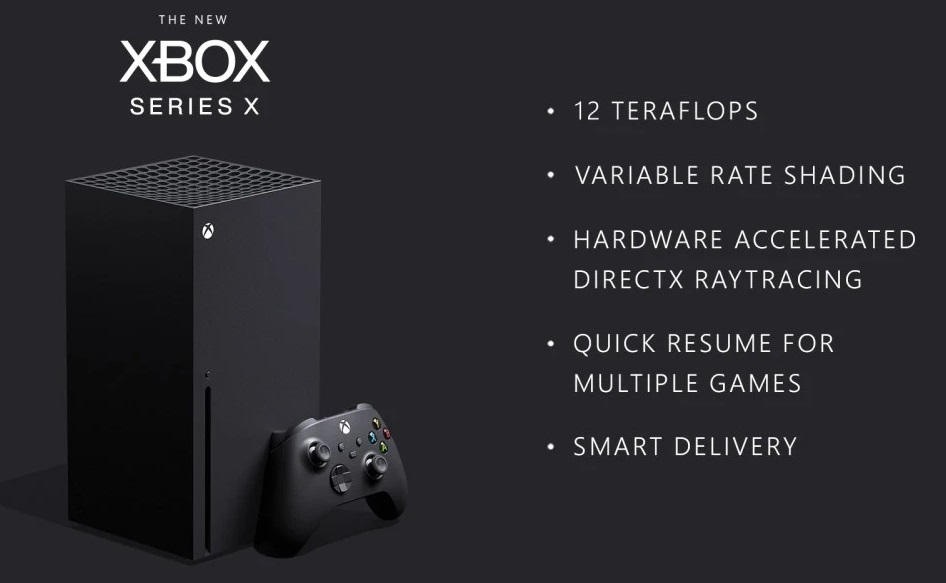 Aside from the Xbox Series X's architectural improvements on the CPU and graphics side, Microsoft has also added support for Variable Rate Shading (VRS) and Hardware-Accelerated DirectX Raytracing (DXR) to its hardware, which will allow Microsoft to push graphics further by enabling raytracing on consoles and by spending GPU cycles more efficiently.

With Xbox Series X, Microsoft also plans to offer a "quick resume" feature on multiple games at once, allowing users of its new console to quickly continue games without the need to wait through long loading screens. SSD storage is also set to help make games load faster, and to make game worlds larger and more varied.

"Smart Delivery" is a new feature from Microsoft which will allow gamers to run the best version of their favourite titles on Xbox Series X, allowing those who purchase Xbox One versions of games to access the Series X version if they buy Microsoft's next-generation console. Microsoft plans to open this feature to developers and publishers for cross-generation titles, though it is up to them if they want to use it.

You can join the discussion on Microsoft's Xbox Series X on the OC3D Forums.
«Prev 1 Next»

Damien c
It's looking very good, now offer the ability to run a Keyboard and Mouse in any game, the ability to use a Hotas like the X56 or Warthog etc and also the ability to have your audio output via a 3.5mm or phono connection from the rear of the Xbox and for me it will be a true pc replacement for just gaming.


Without that, I will probably still get one but the PC will still be my main platform of choice.Quote

NeverBackDown
Didn't really learn much more than what was already known tbh. HDMI 2.1 and VRS were the newest things. Everything else was a given

Now it's Sony's turn. Should be interestingQuote

The big question is, when will AMD release an RDNA 2 GPU to the public? The Xbox Series X has AMD's strongest (announced) gaming graphics chip.Quote

NeverBackDown
Well TFLOPS isn't a great unit to measure performance. So to me it's meaningless. AMD has had multiple slower cards with far more than Nvidia cards in TFLOPS yet doesn't translate to gaming performance. Its such a broad "measurement" and is just a simple equation. Not even a test.
The formula is:
Cores x Clock Speed in Hertz x Floating Point Operations per clock cycle / One Trillion.

While xbox is enticing so far, I could just get xbox game pass and play all the games on Windows then just play PS on PS. Not much sense getting an xbox imo as of now.Quote

WYP
Quote:
TFLOPS is only useful for comparing graphics cards with the same, or similar architectures. RDNA 1 had an average IPC boost of 25% over GCN in their internal tests, which makes this comparison kinda silly.

Even so, a 2x boost in TFLOPS over Xbox One X is big. Add the IPC boost and its better. Than add features like VRS and rapid packed math and developers will be able to get a lot more than that.

Even if RDNA 2 added no IPC boost and just feature upgrades, the Xbox Series X would be 2.5x stronger than Xbox One X (25% IPC boost + 2x TFLOPS) in terms of average compute performance. Add VRS etc and we have a huge performance leap.

Hopefully, RDNA 2 will add some extra IPC into the mix, alongside the already confirmed features like VRS and raytracing. The Xbox Series X and PS5 are going to be great systems, especially now that AMD's Jaguar cores aren't holding it back CPU-wise.Quote
Reply