Microsoft has officially announced their new Xbox One X console, which is designed to offer 4K HDR gaming to the masses and offer more performance than their competitors.
Xbox One X will be the smallest Xbox to date, coming in a smaller form factor than the Xbox One and Xbox One S while also using a more advanced cooler which uses a vapour chamber to offer enhances levels of performance.
This new console will offer 12GB of GDDR5 memory, which is 50% higher than the PS4 Pro and will offer almost 50% more RAW GPU performance when comparing TFLOPs.
The Xbox One X will come with full backwards compatibility with Xbox One titles, though this new console will improve the visuals of older titles though the use of Anisotropic filtering and faster load times through the use of the Xbox One X's additional VRAM as a RAMDISK. 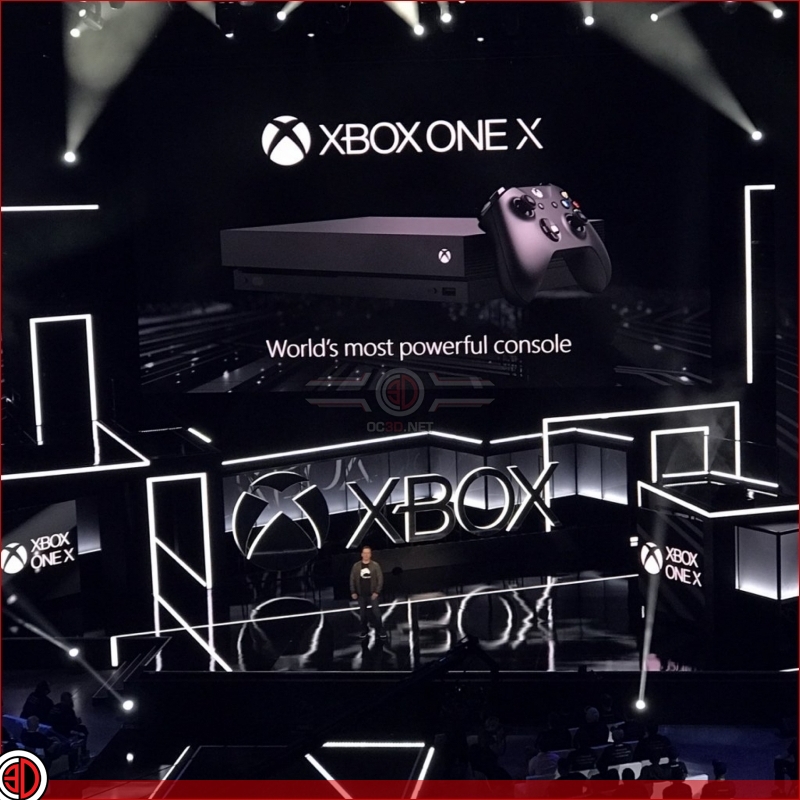 The Xbox One X will release on November 7th at a retail price of $499.

You can join the discussion on Microsoft's Xbox One X on the OC3D Forums.

NeverBackDown
Article is missing...
I think the 50% more figure is misleading. It is true, but it's only 4GB more vram, yet only 8GB is available for games and the PS4 pro has 8 as well (dedicated dram for OS) and it's only two more TFlops which isn't that muchQuote

WYP
Quote:
Yeah, but the PS4 Pro's dedicated OS DRAM is nowhere near enough to make the GDDR5 exclusive for games. In reality, it only gives the PS4 Pro 500MB more RAM for gaming.

So the PS4 Pro has 5.5GB of RAM for games, whereas the Xbox One X has 9GB for games.

Also, while the Xbox One X only offers 6TFLOPS, the PS4 Pro offers only a little over 4TFLOPs, which is a beefy upgrade.

TBH the $499 price tag will be a huge turn off for a lot of people, though the AF upgrades and the promise of supersampling will even make games look better on standard 1080p screens.Quote

NeverBackDown
Quote:
No the PS4 Pro has 1GB dedicated OS. If anything it has no less than 6GB of VRAM for games(probably more too because of the recent update that reduces ram consumption due to reducing the amount of animations on the home screen), which would make it less than 50% for the comparison. Because the X uses 9GB for games. So it's 33%.
2tflops isn't that much. Put that into perspective and it's only 4CUs of performance, which is the difference between a 580/570 at 1080p and both are more than enough. I mean the PS4 Pro basically plays 4k as is with a 570 level of power, so adding more isn't really going to be such a graphical increase in fidelity outside of IP games that only make the game on the Xbox consoles

The specs are not that impressive. It definitely is a system that without a doubbt beats anything a custom PC can do at that price. It has a purpose, but compared to the Pro it isn't much. The next PS will completely demolish it. And we will end up in the same cycle we are now. So it's basically Xbox powerhouse, then PS, etc etc. Not going to be worth upgrading until devs move on and drop support on 5 year old consolesQuote

WYP
Quote:
Here is a quote from one of the designers of PS4 Pro. Courtesy of Eurogamer.

PS4 Pro uses more memory for background tasks, as it now uses a 4K UI etc. This means that the extra 1GB of DDR3 memory will not free up 1GB of GDDR5 for games, instead only allowing an extra 512MB to be used.


Quote:
You also need to recheck your mathematics, moving from Scorpio to PS4 Pro is a move from 9GB to 5.5GB, a 39% decrease. Consider it as an upgrade from PS4 Pro and it is a 63% increase.

Even if you say 2TFLOPs is not much, it is still a huge increase. Yes the PS4 Pro and Xbox One S are nothing compared to modern high-end PCs, but it is still huge for a console.

While when compared to high-end PCs the XBOX One X is not that impressive, it certainly is hugely impressive for a console.

Sony could potentially release a firmware update for PS4 Pro that will cull certain background processes while playing games, which could potentially allow more RAM to be used for games. Even at that, there will still be a huge gap between PS4 Pro and Xbox One X.

I expect Sony to announce a PS4 Pro price decrease at their E3 press conference, undercut the Xbox One X by a little more to make it seem like bad value.Quote

dario
I understand that consoles are optimised and all, but can they really deliver more fps at 4k with HDR than a 11.3 TFLOP PC counterpart? Something MUST be gimped?Quote
Reply