This handheld boasts discrete graphics and a next-gen CPU

AYANEO has started to tease their NEXT II Windows gaming handheld, a Steam Deck like system that promises to deliver users higher levels of system performance with its "Next-Gen 7000 Series CPU" and "new discrete graphics". These listings suggests that the AYANEO NEXT II will feature a AMD Ryzen 7000 CPU and a dedicated GPU, an apparent first for a handheld gaming system like this.

Sadly, this system's use of a "next-gen 7000 series CPU" dues not guarantee that this gaming handheld will use an AMD Zen 4 CPU. as Ryzen 7000 series CPU can be based on Zen 2, Zen 3, Zen 3+ or Zen 4. Beyond that, it is unknown what discrete GPU AYANEO plans to place within their NEXT II gaming system.

Handhelds like the AYANEO NEXT II are primarily limited by battery life and cooling performance, both of which limit the power draw of their contained hardware. This likely means that the discrete GPU used within the NEXT II will likely be on the weaker side of the portable GPU spectrum. Don't expect a portable RTX 4080 in this compact handheld. 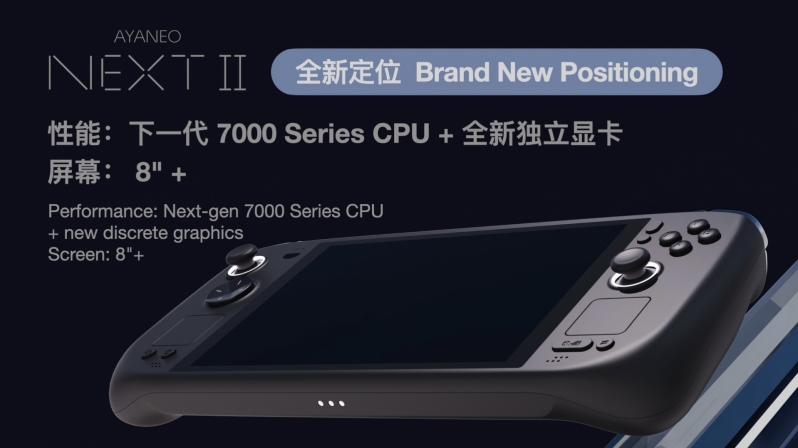 AYANEO has confirmed that their NEXT II Windows gaming system will be "announced soon". As such, we expect to hear more about the AYANEO NEXT's contained hardware soon.

You can join the discussion on AYANEO's NEXT II Gaming Handheld on the OC3D Forums.