The SCAR 17-inch is back and thinner than ever

The idea behind ASUS' ROG Strix SCAR II GL704 is simple, look at fan feedback, address any shortcomings and update the system with the latest hardware.

17-inch laptops were one a pain to transport, specially gaming-grade models, back in a time where screen bezels were huge, CPU/GPU heatsinks were larger, and the weight of complete systems became uncomfortable, especially for those who travel long distances. Now, things are different, especially with ASUS' new ROG Strix SCAR II GL704.

For starters, ASUS has kitted this notebook out with a 17.3-inch IPS display from AU Optronics, offering users a 144Hz refresh rate, 100% coverage of the sRGB colour gamut and a 3ms response time. Better still, the bezels around this panel are ultra-thin, up to 50% narrower than other 17-inch notebooks, making this the first 17.3-inch notebook that is under 400mm wide. To put that into perspective, my 15.6-inch laptop is around 380mm wide.

For storage, this notebook can ship with a 128GB, 256GB or 512GB M.2 SSD alongside an optional 1TB HDD or SSHD. For external connectivity, the notebook offers a two USB 3.1 Gen 2 ports (1x Type-A + 1x Type-C), three USB 3.1 Gen 1 ports one G-Sync compatible mini-DisplayPort, a single HDMI 2.0 connection, Ethernet, Headphone out and an SD card reader. 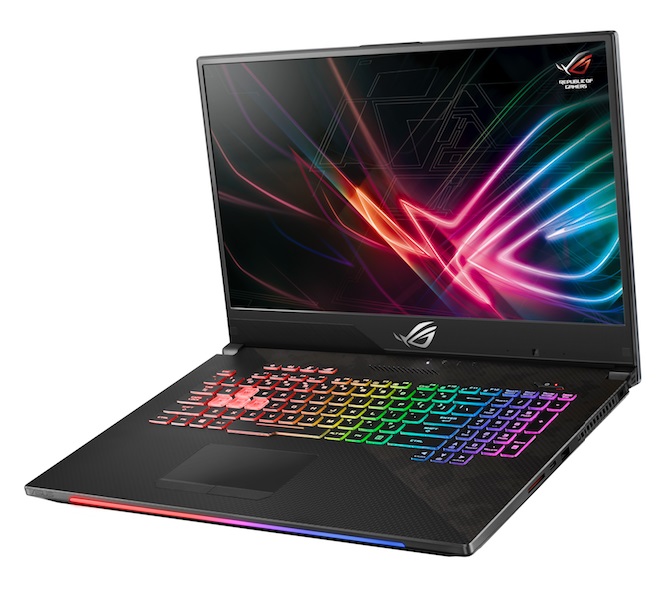 For cooling, ASUS' ROG Strix GL704 has three heatsinks and two cooling fans, with two heatsinks being shared between the user's CPU and GPU while the third remains exclusive to the user's graphics card. This design ensures optimal cooling in both CPU-heavy, GPU-heavy and mixed workloads. ASUS states that they use incredibly thin copper fins in their heatsinks to maximise surface area and minimise airflow resistance.

You can join the discussion on ASUS' ROG Strix GL704 SCAR II gaming notebook on the OC3D Forums.

MacLeod
I think that looks pretty cool. I am becoming a really big fan of Asus' Strix lineup. Everything with that badge on it seems to be really good quality.Quote
Reply