ASUS' TUF Gaming A15 and A17 systems are two of the latest additions to the company's gaming lineup, offering users the combined power of AMD's Ryzen 4000 series of mobile processors and Nvidia's Turing graphics cards.

The combination of AMD's Zen 2 architecture and 7nm manufacturing allows the Ryzen 4000 series to be AMD's most powerful and efficient mobile processors to date, providing users with ample performance and battery life.

ASUS's TUF A15 will be available with up to a Geforce RTX 2060 graphics card, and a Full HD display that supports refresh rates of up to 144Hz with VESA Adaptive Sync. ASUS' A17 model will support refresh rates of up to 120Hz and Nvidia's lower-end GTX 1660 Ti graphics cards. Both models will feature IPS level displays and will support DDR4 3200MHz memory.

With these specifications, both of these notebooks promise to deliver strong gaming performance on the go. CPU-wise, both models will support AMD's Ryzen 4000 H-series processors with models up to AMD's Ryzen 9 series. So far, AMD has not announced a Ryzen 9 4000-series processor.

Both ASUS' TUF A15 and TUF A17 support RGB illuminated keyboards, allowing users to adjust their keyboard to their liking. LED backlighting helps keyboard users to see their keys in low-light conditions, which is a feature that's difficult to go back from after owning a laptop with a backlit keyboard.

ASUS plans to release its TUF Gaming A17 and A15 notebooks in the near future, though Intel 10th Generation models are in the works under TUF Gaming F15 and F17 branding. These models will release with WIFI 6 support, and are expected to hit retail sometime in 2020. ASUS' TUF Gaming F-series were not showcased at CES, which means that ASUS' TUF Gaming A series are likely to release first.

Below are the specifications of ASUS' TUF Gaming A15 and A17 series of Ryzen-powered notebooks. 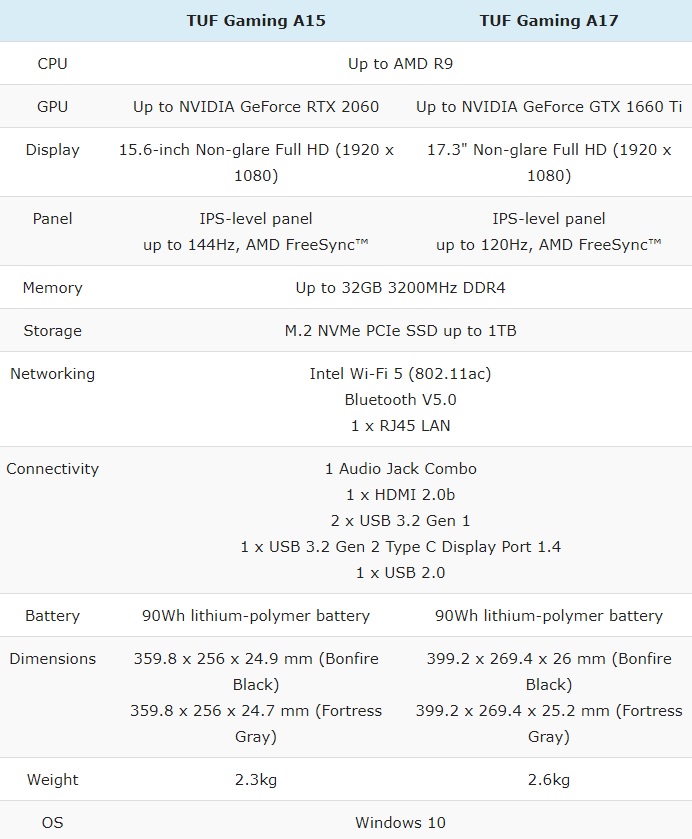 You can join the discussion on ASUS' Ryzen 4000 powered TUF Gaming A15 and A17 series notebooks on the OC3D Forums.