Up to 13 degrees cooler than normal thermal paste

In the world of OEM systems, manufacturers are limited when it comes to differentiation. There is a reason why the vast majority of laptops utilise the same basic design. The industry discovers what works, and over time things start to homogenise, at least until the next innovative step is found.

Producers of gaming notebooks have few ways to stand out from the crowd. Component selection is defined by what is available from Intel, Nvidia and AMD and high-resolution/refresh rate screens are often sourced from the same manufacturers. In some ways, there is little that is unique about today's notebooks, at least at a basic hardware level.

Today, what separates the worst from the best is design, especially when it comes to cooling systems. Every generation at least one manufacturer is shouting about how good their latest notebook fans or heatsinks are, enabling their most recent designs to run cooler, at higher sustained clock speeds or quieter than their competition.

In many ways, cooling is the most exciting differentiator in the notebook market, with ASUS leading the charge into the world of "exotic thermal compound", delivering load temperatures that are up to 13 degrees cooler on their G703GXR series notebooks. To offer these lower thermals, ASUS has utilised Thermal Grizzly's Liquid Metal TIM, instead of a standard thermal paste.

Instead of improving the cooling system of their G703GXR for Intel's 9th Generation processors, ASUS has increased the conductivity of the interface between their notebook cooler and the system's processor, allowing heat to be more efficiently transferred to the system, making the user's CPU cooler, and the entire system quieter.

Liquid metal compound from Thermal Grizzly reduces CPU temperatures by up to 13°C* compared to standard thermal paste. The right amount must be applied meticulously for the best results, so we commissioned custom equipment that automates the process with mechanical precision. The block that sits on the CPU also has a special internal fence that prevents liquid medal from leaking out over time. 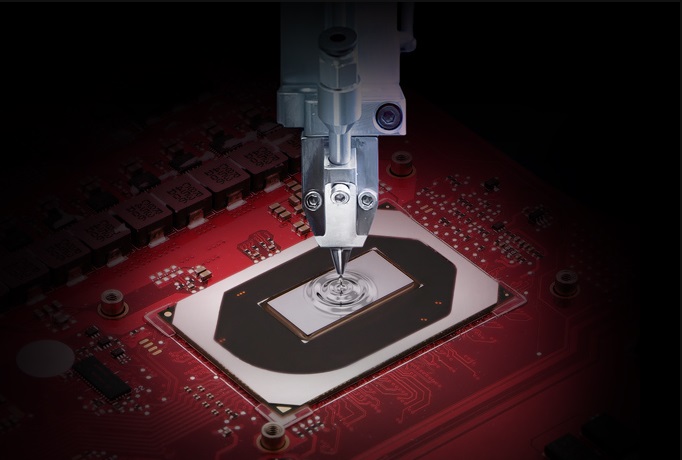 This is innovation at work within the OEM notebook market, taking knowledge from the PC enthusiast scene to apply cutting-edge thermal interface technology into their pre-built systems in a way that will improve their thermal performance while posting no risks to their end users.

You can join the discussion on ASUS bringing Thermal Grizzly Liquid Metal Thermal compounds to their latest ROG notebooks on the OC3D Forums.

Warchild
13C is an impressive drop in any scenario. For laptops its almost too good to be true. Heres hoping for mainstream gaming laptops to follow suitQuote

dazbobaby
I've often thought of doing the same with my laptop, both the CPU and GPU can be got at so that's not the problem.


The biggest issue is the possibility/likelyhood that it will spill out over time, because you just can't keep a laptop flat all the time. Electrical tape or even PTFE will help... but it's still a risk.

Warchild
Quote:
Dont use tape. With heat, tape can still warp. Stickiness can melt and slide. If you know someone or have got youself some clear nail varnish. Use that. Let it cure, and its rock solid for years to come.

Drawback is that there is no going back once done. (Not that it matters)Quote

Avet
Quote:
Liquid metal TIM has very high surface tension. That is why it is such a pain to spread out, and why you need to apply it on both surfaces. It will never leak out if you apply a proper amount. If it does leak out it means you have put way to much.

And also pretty much everyone is applying it wrong, so people are afraid of using it.

This is how you should do it.