AMD's Stock is now up 52%, with a value of 3.99USD, the largest increase the company has ever seen received since it was first listed in 1979.

The company has also increased their expectation for Q2 2016 earnings, with the company expecting to make gains in the discrete GPU market. 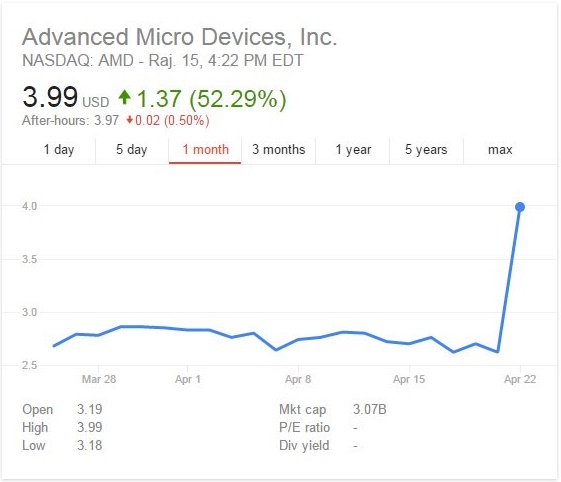 AMD's Lisa Su has stated that the company expects to regain client compute and discrete graphics market share over the next quarter, stating that this will be due to their strong software and the high power efficiency of their new Polaris GPU Architecture.

One thing to note is that this comes not long after Intel has announced major layoffs and plans to move their focus outside the traditional desktop PC market, leaving the door wide open for AMD to make some market share gains moving forward.

You can join the discussion on AMD's Stocks rising 52% on the OC3D Forums.

AMD's Stock is now up 52%, with the company expecting market share gains next quarter. https://t.co/QBO02WoeiM pic.twitter.com/gmZBxBqOZ6

Tripp
It's good to see AMD doing well for onceQuote

WYP
Quote:
I've been thinking for a long time that AMD will have a comeback or at least move to profitability again, should have invested back then....

With Zen coming around the corner and Intel looking the other way ATM now might be a good time to invest in some stocks. Shame that would be a massive conflict of interest for me

Thelosouvlakia
http://i.giphy.com/KWGL8JEkrjXRC.gif
What probably happened at the board meeting following this

NeverBackDown
Stock only rose this much because over the next few years they are taking in $1.5billion from SoC designs and IP licensing. While a huge win, the stock is just rising from short term buyer's. It will fall back down. This huge rise just shows that there are a lot of people waiting and hoping AMD can pull it back with Polaris and Zen. It's a good sign for them. On the other hand it tells you of they fail at all, stock will essentially be worthless and they will have to sell some assets..Quote

Kushiro
Agreed. TBH it would still be quite profitable for those who bought low. Nice bump to sell with.

Its nice that they got this increase, however if they think this gives them the leeway to relax their efforts. Then they've got another thing coming...Quote
Reply