AMD plans to deliver a 1.5+ exaflops supercomputer in 2021

AMD plans to deliver a 1.5+ exaflops supercomputer in 2021

AMD has announced their plans to deliver a 1.5+ exaflops to the Oak Ridge National Laboratory (ORNL) in 2021, working with Cray Incorporated and the US Department of Energy (DOE) to do so.

On both the CPU and graphics sides, this AMD/Cray Frontier system will utilise future generation Radeon Instinct and EPYC series processors, with AMD confirming that their Radeon Instinct GPUs will use HBM memory and be optimised for AI performance. This PC is expected to become the world's fastest supercomputer when it is delivered, which would be an astounding achievement for AMD.

Alongside this system, AMD plans to deliver ORNL an enhanced version of their ROCm programming tools, which will be developed alongside Cray to tap into the insane performance levels that the combined efforts of AMD's Radeon Instinct GPU and EPYC processors can offer. 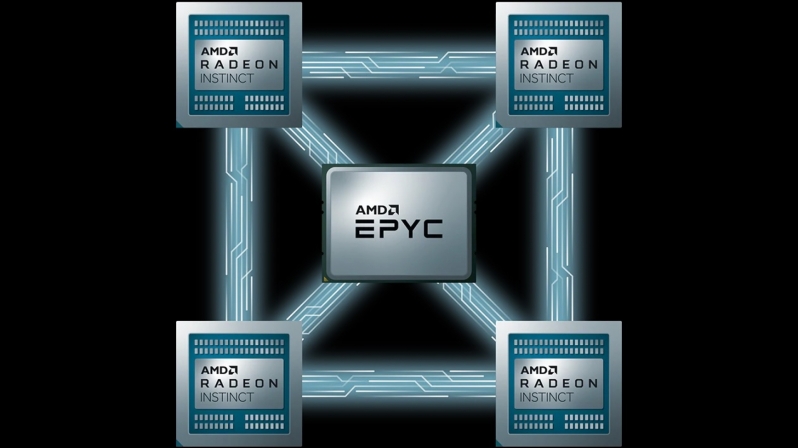 In 2021, AMD plans to bring the world onto the era of exascale computing, offering scientists to access performance levels which will enable them to create more accurate simulations and models than ever before to deepen humanity's understanding of the world, potentially revolutionising the science of weather, sub-atomic structures, genomics, physics, and more.

If everything goes to plan, AMD will have successfully moved from having virtually no presence in the Supercomputing market to becoming the leader of the pack with the delivery of their 1.5+ exaflops system, which is a staggering turn of events. Intel has also been tapped by the US Department of Energy to create an exascale supercomputer but at the time of writing AMD's system appears to be more ambitious, with plans to offer 1.5 exaflops of performance, rather than Intel's plans to offer an already impressive 1 exaflops computing power.

You can join the discussion on AMD's plans to deliver a 1.5+ TFLOP supercomputer by 2021 on the OC3D Forums.

demonking
Massive kick in the teeth there for Intel considering that is where summit is located. Glad these guys are getting it, the sort of science these guys study is close to my heart and very current rather than theoretical or purely computational.Quote

WYP
Quote:
To be honest, I think this is more of a kick in the teeth for Nvidia. They were doing very well in the supercomputer market and now the US has plans to build two exascale systems with Intel and AMD. The scale of these systems will make a mockery of today's Nvidia-powered supercomputers.

TBH I am not 100% sure on the details, but it makes sense that two separate architectures are being used to bring exascale computing to the US. This way there they have a little more redundancy if one manufacturer fails to meet its target and it splits the money between two US companies.

Nvidia, lacking enterprise-grade CPUs, are not in a great position to continue being successful in the supercomputing space, as both Intel and AMD can integrate their CPUs and graphics products together in a way that Nvidia cannot.Quote

NeverBackDown
Well, you also have to take into account not everything relies on the GPU. So Nvidia are only a viable option in certain tasks that certain supercomputers need. You still need heavy CPU power, either way, so is this the result of not needing the super expensive Nvidia products as they mostly just need CPU power, or is this the result of Nvidia just charging so much they outbid themselves of the run for the GPU manufacturer?Quote

tgrech
I think it's probably more to do with the speed & bandwidth of the interconnects and the level of homogeneity between the CPU & GPU/their physical memory pools, AI can be a super bandwidth heavy task, obviously particularly when your data inputs are along the lines of videos, and Intel and AMD both have aggressive projects with custom or progressive technology in these areas. Of course, so do NVidia (NVLink) but the only CPUs this works with are IBM PowerPC I think.Quote
Reply