Nintendo's Switch is one of the best consoles available today, packing portable power that exceeds the capabilities of last-generation consoles. Nintendo's hardware has proven to be capable of many things, a lot of which was previously considered impossible. Still, it's hard to deny that it struggles to keep up with the likes of PlayStation and Xbox in terms of raw power.

What if we could bring the power of gaming PCs to a switch-like form factor? That's what the hardware boffins over at Alienware were thinking. A gaming PC in a Switch-like shell that can run Windows and seemingly do everything a full-sized PC can. That's Concept UFO in a nutshell.

While Alienware's has remained tightlipped about the hardware used in Concept UFO, the project appears to be far along in its development. The screen used is a 1200p display that's eight inches in size, making it larger and more pixel-dense than Nintendo's 720p Switch screen. At this time we do not know what CPU, graphics processor or memory configuration sits inside Alienware's UFO, though it's unlikely that this compact form factor doesn't come without compromises.

Mouse and keyboard fans should know that this system can support wireless peripherals and wired models using USB Type-C. It looks like USB Type-A is too large for such a compact PC design.

Like Nintendo's Switch, the console's side-mounted controllers can be removed and attached to a secondary unit to create a wireless gamepad. The console also has an integrated kickstand to prop the screen up on a table or other surface, though it appears to be a lot more robust than what Nintendo's Switch offers.

From the outset, this console appears to an ideal use-case for AMD's Ryzen 4000 series mobile processors, with the power efficiency of AMD's Zen 2 CPU cores, 7nm manufacturing and integrated Radeon graphics acting as suitable matches for Alienware's mobile gaming platform. Dell is expected to talk about its Alienware Concept UFO design during its CES Press Conference which starts later today at 6 PM GMT. 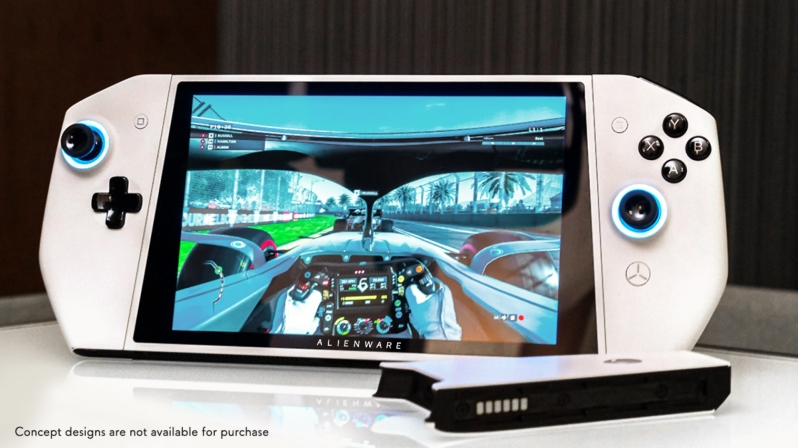 You can join the discussion on Alienware's Concept UFO portable gaming PC on the OC3D Forums.

Warchild
So its an oversized PSP then? With a Mercedes logo for a button,

AlienALX
It's the new Intel whatever with the new igpu apparently, so Nintsueoh wouldn't stand a chance.Quote