Ultra-fast SSD performance for the masses

Western Digital has today revealed a new addition to its WD Black family of SSDs, creating a new gaming-focused model which deliver read speeds of up to 7,000 MBps and is expected to be compatible with Sony's PlayStation 5 console.

Meet the WD Black SN850, an SSD which is said to utilise Western Digital's second-generation SSD controller to deliver speeds which come close to saturating the M.2 PCIe 4.0 interfaces on today's PCs. These SSDs will be available with and without an integrated heatsink and will be available with 500GB, 1TB and 2TB models.

The SN850 is rated to deliver 1,000,000 (1 million) random IOPS, delivering end-users exceptional levels of storage performance. Today, Western Digital has launched the heatsink-free version of this SSD and has confirmed their plans to release a version with an integrated heatsink and RGB lighting in 2021.

With games and other software becoming larger and larger, gamers are seeing a growing need for which capacity M.2 storage solutions. The upcoming launch of PlayStation 5 and Xbox Series X will also see SSD storage become a baseline requirement for future games, which will mean that mechanical storage solutions and slower SATA SSDs may soon no longer be enough for new AAA games.

Below are the full specifications and US prices of Western Digital's new SN850 SSD. 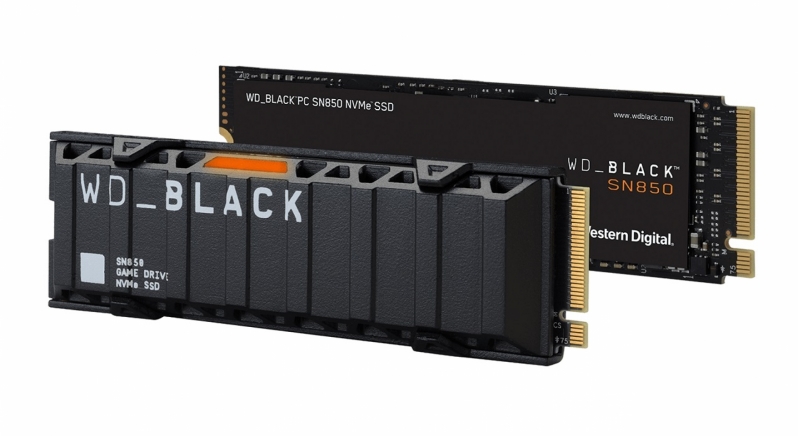 You can join the discussion on Western Digital's 7GBps WD Black SN850 PCIe 4.0 SSD on the OC3D Forums.

looz
That design looks like they're made by Dedsec from Watch Dogs series.Quote

NeverBackDown
Wonder how much DRAM they have as well as type of DRAM. Pretty important for performance.

What is annoying however is how WD are claiming its PS5 compatible and every news outlet is reporting it as such. Sony never said it would be approved. Why anyone(especially WD) would report it as approved is beyond me. Sony clearly said they were not going to whitelist any drives until after launch.

Samsung's 980 Pro isn't approved and is just as fast, they didn't just outright claim it was approved.Quote

looz
Well, they haven't produced a whitelist of good drives, but they have outlined the performance requirements:


So if WD is confident that their drive is fast enough, the can claim compatibility.Quote

NeverBackDown
He did not outline any requirements. He specifically said by year's end he expects drives to reach 7GB/s but that we are comparing apples to oranges. It comes back to the NVMe specifications of 2 priority levels vs the 6 PS5 has and the differences in architecture between the controllers.


They can claim compatibility. But what happens if Sony ends up saying actually no it's not fast enough? Lawsuits everywhere.Quote

looz
He did? Specifically that their drive has 5.5GBps of bandwidth but a more efficient scheduler for their use - so they expect some required overhead for emulating that on their own chip instead of utilising the drive's controller.


WD is confident that the drive has enough throughput for that overhead. And I doubt they're making that claim willy-nilly.Quote
Reply