Before CES Toshiba teased an entry-level M.2 NVMe SSD, a drive that would provide SSD performance that surpasses traditional SATA drives while also releasing with a similar price point. This SSD is the Toshiba RC100, a compact M.2 SSD that will offer p[erformance levels that are beyond any SATA offering while coming at a price that is just 10-15% higher.

Toshiba has created this SSD by integrated an in-house controller with the company's 64-layer BiCS TLC NAND, creating a single package SSD that uses two PCIe 3.0 lanes and fits into the compact 2242 (42mm long) M.2 form factor. Performance-wise, this drive offers sequential read speeds of up to 1,620 MB/s and sequential write speeds of up to 1,130 MB/s with 4K Randon access performance of up to 160,000 read IOPS and 120,000 write IOPS.

Sitting within the compact 2242 form factor, it is understandable why this SSD ships with capacities of just 120GB, 240GB and 480GB, lacking larger 1TB of 2TB options. Higher storage densities are only possible with this drive if Toshiba increases the storage density of their memory, due to the chip's single package design. 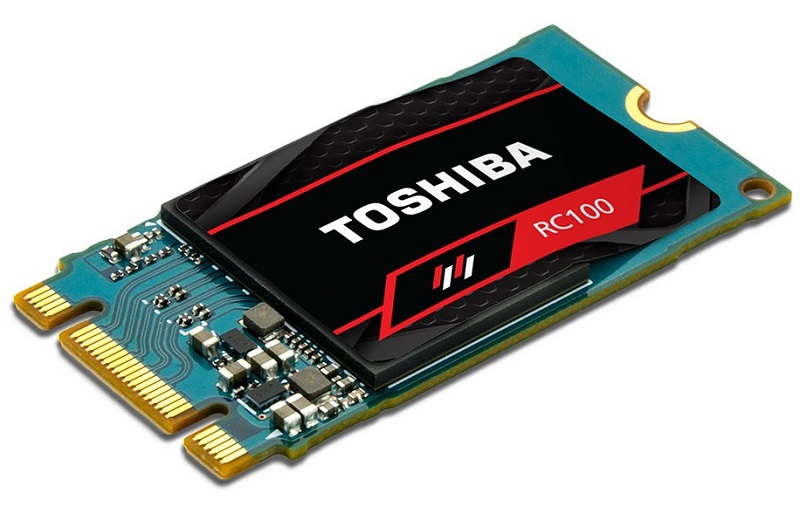 While this SSD isn't a performance competitor to the like of Samsung's top tier 960 Pro or Evo series of SSDs, this drive does offer a compelling balance of performance and affordability which will undoubtedly bring many new PC builders to M.2 storage drives. Sadly the exact pricing of this SSD is unknown, though it is expected to release onto the market in the near future.

Toshiba will be backing up this SSD with a three-year warranty.

You can join the discussion on Toshiba's RX100 entry-level M.2 NVMe SSD on the OC3D Forums.