Expect a huge speed bump over the XG5

Toshiba has officially launched their new XG6 series of NVMe SSDs, a successor to the company's popular XG5 series of client SSDs, which will utilise high-performance NAND and an in-house Toshiba controller to deliver a massive performance boost over its predecessor.

The primary change that Toshiba has made to the XG6 series is the company's use of 96-layer BiSC TLC NAND, which supports the Toggle NAND 3.0 interface to deliver speeds of 667-800 MT/s, which is a major boost over the 400-533 MT/s that is offered by Toshiba's older 3D NAND technologies. Toshiba's controller remains unchanged over the XG5, aside from changes to the device's firmware.

While the drive is available in 256GB, 512GB and 1024GB capacities, the device is said to offer remarkably similar performance levels across the XG6 lineup, thanks to the device's use os a mixture of 256Gb and 512Gb TLC dies to ensure that hardware parallelism isn't compromised at lower capacities. 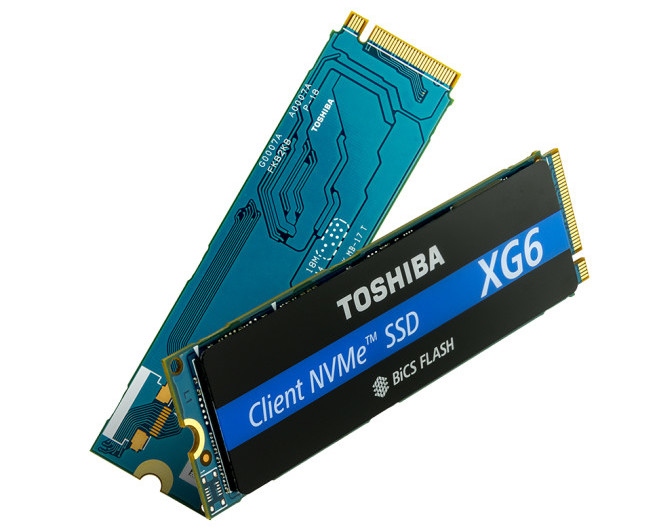 Toshiba has started sampling their XG6 series of M.2 SSDs to OEMs, so these drives are expected to show up inside consumer systems over the next few quarters. At this time, it is unknown whether or not Toshiba plans to release a consumer version of their XG6 SSD, though a retail release seems likely given the drive's performance levels.

You can join the discussion on Toshiba's XG6 series of NVMe SSDs on the OC3D Forums.