Toshiba is the producer of the world's first QLC-type NAND, which has the ability to store 4-bits of data per memory cell and offer up to 25% more storage density than today's TLC NAND flash storage.
Unlike the typical MLC (Multi-level call) 2-bit and TLC (Triple level cell) 3-bit NAND that we see in modern SSDs Toshiba's QLC (quad-level cell) delivers 4 bits of information per memory cell, greatly increasing the amount of storage that can be fitted into a single memory die. The downside here is that these increases in complexity often come with greatly reduced endurance levels, though Toshiba has been able to minimise these issues thanks to some intelligent circuit design work.
NAND flash is rewritten by delivering a different voltage to a cell, with SLC (1-bit) NAND having only two storage options (1 & 0), with each increase in storage coming with a doubling in complexity, requiring 2x the number of voltage options. Traditionally when creating NAND that fits more data, bits, into a single cell the memory loses some performance and longevity, especially when it comes to workloads with heavy writes.  This is why not all modern SSDs use TLC, 3-bit, NAND today. This made the industry assume that QLC (4-bit) NAND was too complex and not worth investing in, but Toshiba has proven them wrong.
NAND/memory endurance can be expressed in a value of Program/Erase (P/E) cycles, with Toshiba's new NAND offering an endurance target of around 1000 P/E cycles. This is considerably higher than industry estimates of 100-150 P/E cycles, giving Toshiba's QLC NAND similar endurance levels to TLC memory. 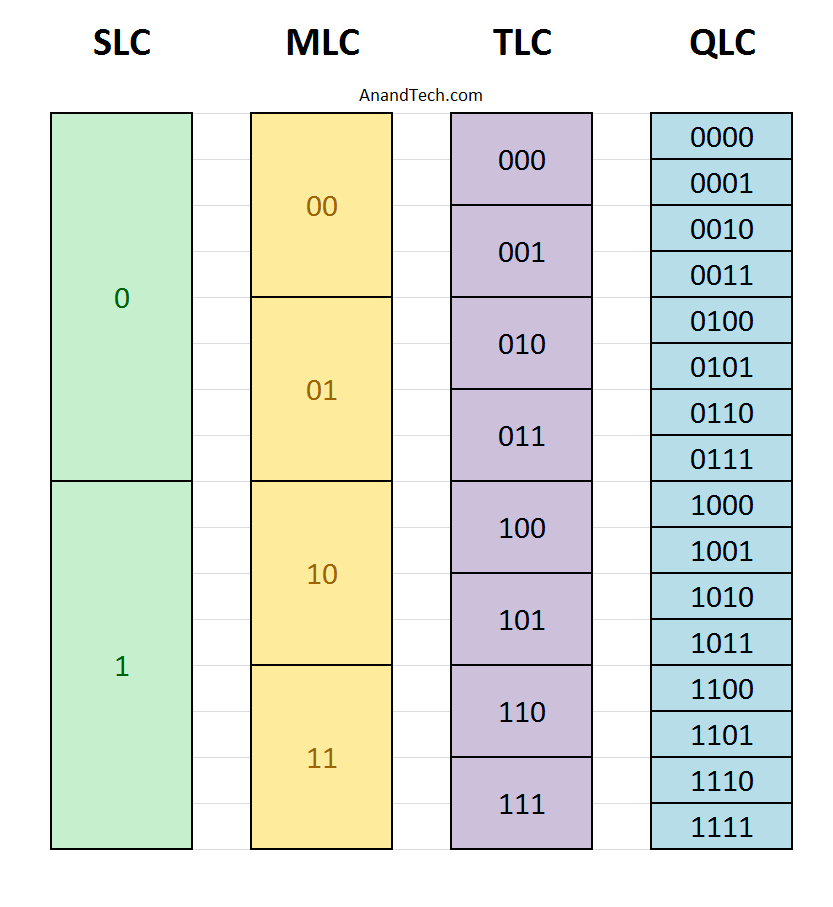 This level of endurance will no doubt make QLC NAND look attractive to SSD makers, especially those that wish to create fast, long term storage devices, where drive writes will be limited.

Samples of Toshiba's upcoming QLC powered devices started shipping to SSD and SSD Controller vendors last month, with the company planning a demonstration at the 2017 Flash Memory Summit in August (7-10). At this time it is expected that this new type of memory will have some performance shortcomings when compared to TLC and MLC flash, but its sheer cost/GB and impressive levels of endurance will certainly be of interest to both consumers and device makers.

Toshiba says that their QLC NAND requires 2x the accuracy of TLC technology, requiring the company to combine advanced circuit designs with their 3D Flash technology to overcome these technical challenges.

At this time it is unknown when we will first be seeing this new type of flash in consumer products, especially given Toshiba's current financial situation, though it has huge potential to offer a lot of value for money, especially when combined with a fast caching technology.

You can join the discussion on Toshiba's new 4-bit QLC NAND on the OC3D Forums.

NeverBackDown
Wow pretty impressive I'd say. Wasn't TLC rated around 1200 P/E cycles? Can't remember what it was. Whatever it is it's not much higher than this so good job Toshiba. Beat Samsung at it where Samsung is by far the market leader.Quote
Reply