Toshiba predicts that SSD size will double every year until 2018, meaning that 128TB SSD should be on the market by 2018, easily beating mechanical hard drives in terms of storage per drive.

These increases in capacity will be due to VNAND and other technologies which will increase the capacity of NAND chips as well as increase in both reliability and speeds o NAND when compared to currently available planar/2D NAND. 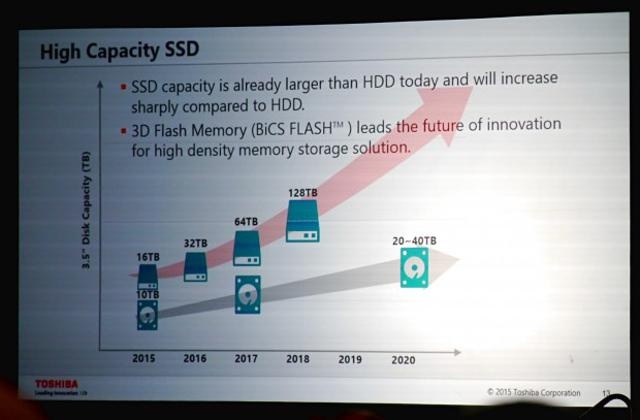 Toshiba also plan on developing 4-bit data (QLC) NAND to replace today's 3-bit (TLC) NAND, which will allow Toshiba to increase the capacity of Solid State drives by 33%, which is a massive increase considering that no additional silicon is used (in theory).

Right now TLC NAND has several disadvantages to 2-bit (MLC) NAND, with a lower lifespan and lightly decreased speeds. This will likely place Tohiba's 4-bit NAND as a storage medium that is useful only for long terms storage which are placed under relatively light workloads, such as dedicated storage devices.

You can join the discussion on Toshiba's planned 128TB SSDs on the OC3D Forums.

Toshiba predicts that SSD size will double every year until 2018. 128TB SSD in 2018! http://t.co/BltFtbaLuS pic.twitter.com/YdyXATr6Ig

NeverBackDown
So we would need some serious BIOS updates to even recognize the drives. Also don't think Windows would know what to do. Probably BSOD

NeverBackDown
Quote:
You need to use the GPT format when going over 3TB I think.. Also think the max Harddrive size for a single drive is 16TB but not much info on the web, so not sure.Quote

whitejackale
Quote:
From what I managed to find, GPT allows for a maximum size of 9.4 zettabytes, which is around 9.4 billion terabytes.

But, I also read that the maximum size for ntsf is only 256 terabytes. I believe this is software based though, so they can probably modify it to increase the size when needed.Quote