Toshiba has announced their new OCZ RD400 M.2 NVMe SSDs, with read and write speeds of up to 2600MB/s and 1600MB/s respectively and capacities of up to 1TB.

This SSD is designed to bring the OCZ brand back to the enthusiast level, offering ultra-fast speeds and a great deal of reliability. Toshiba is offering a 5-year warranty with these SSDs and will be using their own 15nm MLC flash to build the drive.

The launch of the new Toshiba OCZ RD400 SSD series delivers enthusiast-level performance in both a compact M.2 and adapter card form factors to provide end-users with high bandwidth and platform flexibility for next-generation NVMe and PCIe mobile and desktop systems,

The RD400 gets back to the OCZ brand's enthusiast roots and offers power-users, gamers, and professionals a cutting-edge storage solution designed to support demanding consumer applications. 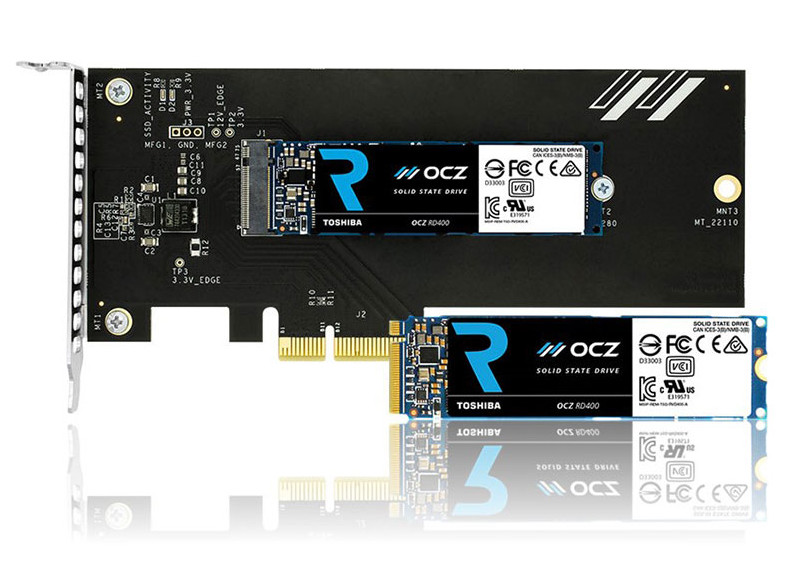 The OCZ RD400 will come in 128GB, 256GB, 512GB and 1024GB versions, which offer the capacities and endurance ratings below.  Each drive has a 5 year warranty where the user can write around one-third of the SSDs space every day, which will be more than enough warranty for most users.

Right now we do not have any pricing information on the Toshiba/OCZ RD400 M.2 SSD.

You can join the discussion on Toshiba's OCZ RD400 M.2 SSD on the OC3D Forums.

Doomslayer
Really another company has done a Blue PCB faceplamQuote

Dorset Yid
Very Nice, how do they compare to the Samsung SSD 950 Pro'sQuote

jimma47
Quote:
Normally I'd agree but I think this looks pretty sweet with the sticker design. (Plus black and blue would go with my rig)Quote