1Tb of QLC NAND per chip

SK Hynix has started to sample what they call 4D CTF (Charge Trap Flash) QLC (Quad-Level-Cell) NAND, delivering up to 1Tb of storage per chip to facilitate the creation of ultra-high-density storage devices.

So what is 4D NAND? Well, it isn't 4D. SK Hynix hasn't somehow broken past the three dimensions that that universe occupies. No, this is just 3D NAND, but what SK Hynix has done is place their periphery circuits under their 3D NAND stack, reducing their NAND's die space requirements.

Think of it this way. Imagine a large residential tower block and a smaller car park beside it. The tower block is 3D NAND, and the car park is the Periphery, control circuits that sit at the edge of NAND chips. SK Hynix's design builds the tower black/NAND on top of the car park, allowing the whole structure to take up less die area. SK Hynix calls this 4D, but it's just a fancier, more efficient implementation of 3D NAND.

SK Hynix's new NAND is now being sampled to SSD controller manufacturers, such as Silicon Motion, who will enable support for this new NAND type on their future SSD control circuits. Wallace Kou, the Chief Executive Officer of Silicon Motion, has confirmed that the company has received QLC samples from SK Hynix and that these samples "meet client SSD product requirements", noting that they are "impressed by its overall performance."

SK Hynix also plans to produce enterprise-grade QLC SSD algorithms and controllers internally, with hopes to release SSD solutions that will be able to compete with high-capacity HDDs within the datacentre market.

Moving forward, SK Hynix plans to stack their 4D NAND higher to create 128-stack NAND with their 6th generation 3D NAND technology. Further in the future, over 500 NAND layers are expected, though SK Hynix has not set a timeframe for their NAND stacking target. 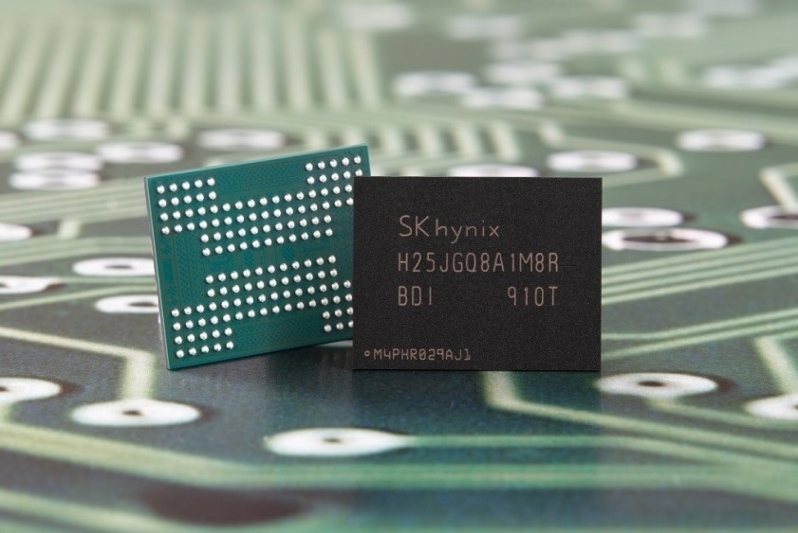 SK Hynix believes that QLC NAND will see its market share within the NAND market increase from 3% in 2019 to 22% in 2023, thanks to the new NAND type's higher per cell capacities than today's TLC (Triple-Level-Cell) NAND. This trait allows QLC NAND to deliver higher levels of storage per unit of die space, making the NAND cheaper to produce per GB and more affordable for both consumers and SSD makers.

You can join the discussion on SK Hynix' 96-layer 4D QLC NAND on the OC3D Forums.

WYP
Quote:
The same things were said about TLC once upon a time. A lot of this will be mitigated with smart controllers and newer NAND.

I'm trying to think of the last time I heard somebody say they had an SSD fail on this forum. That said, it will be interesting to see what the failure rates are on new QLC drives.Quote

NeverBackDown
Well TLC wasn't much different in terms of longevity with MLC. QLC though is kinda halfing it. Which is a big difference.Quote

tgrech
The node size has increased with 3D NAND though so it's generally a net improvement in reliability with modern QLC. You gain more from moving to QLC and reverting/increasing node size than you do from shrinking nodes further/sticking with sub-20nm nodes and sticking with TLC. Node shrinks are the real killer with reliability.Quote

Gothmoth
Quote:
halving it from TLC to QLC you mean?


well im not sure if that is right.

but QLC drives should be bigger than most MLC or TLC drives.
so each cell should be used less or equal to smaller MLC/TLC drives.

it´s still used for caching in one of my systems.
for it´s 80GB size it has a lot of writes to handle.

and i read QLC drives use beefier hardware, better write strategies to counter the wear.

if QLC lasts only 1/2 or 1/3 of the time (given that my MLC may work for another 4-5 years) im still fine with that.Quote
Reply