This tech could double the potential IOPS of future HDDs

For a long time standard HDDs (Hard Disk Drives) have been named "spinning rust" by many within the tech industry, having been surpassed in a lot of regards by NAND-based solid-state drives. This is especially in areas such as raw read/write performance, latency and the number of input and output operations (IOPS) they can conduct in a given timeframe.

This discounts on an area where HDDs have a crucial advantage, pricing. Hard drives are much cheaper to produce than an equivalent amount of HDD storage, with a 2TB HDD costing as little as £50 while a 2TB SATA SSD can cost upwards of £500, not even accounting for the higher cost of NVMe SSDs.

HDDs are far from being on their last legs, though that doesn't mean that performance isn't a contributing factor to their continued success, alongside increased to data density. Seagate has started showcasing their new MACH.2 Multi-Actuator technology at the Open Computing Project (OCP) Summit, a technology that will allow future HDDs to offer up to 2x as many of read/write IOPS as today's HDD design. 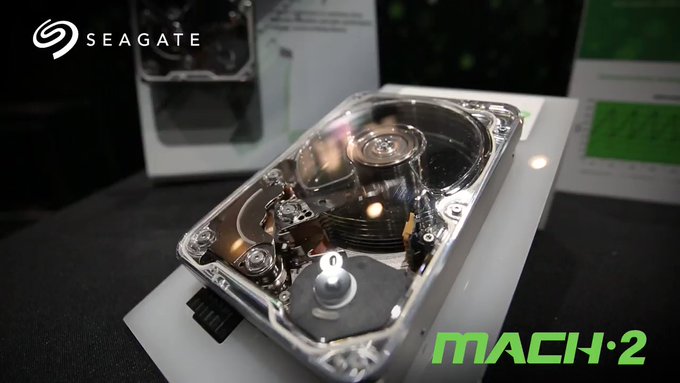 While the idea of Multi-Actuator technology isn't new, the technology has become a lot more viable as single-drive capacities, and the number of physical disks inside HDDs has increased. Seagate has also stated that their Multi-Actuator tech currently adheres to today's standards, making their next generation drives "plug-and-play" with today's infrastructure. These drives are expected to use today's industry-standard 3.5-inch form factor.

At the OCP Summit Seagate is also expected to showcase HAMR technology, a technology which uses heat to the HDD's write surface for a fraction of a second to allow the drive's write magnetic field to imprint data onto smaller spaces. This will increase the amount of data that can fit onto a single hard disk, which will allow future HDDs to offer increased capacities.

Seagate's MACH.2 technology is designed to offer increased parallelism within a single HDD, allowing a single drive to handle several operations at once and deliver enhanced performance. In theory, this technology could enable HDDs to operate up to two times faster than single-actuator competitors.

When combined with technologies like HAMR (Heat Assisted Magnetic Recording), Seagate will be able to deliver both performance and capacity improvements with next-generation HDDs, offering precisely what today's data-driven market demands.

You can join the discussion on Seagate's MACH.2 Multi-Actuator technology on the OC3D Forums.

NeverBackDown
Real world performance will dictate if it's useful. Also the price increase will be interesting to seeQuote

Digikid
It's a Seagate product. It will die within a month.Quote

AlienALX
Funny thing being an article I read a couple of years back claiming we would never again see things like this because the future is all SSD.

It's good to see. Especially with SSD prices being what they are

Gothmoth
Quote:
lol you come across pretty much clueless with that comment.

please don´t say you come to that conclusions from the few seagates you ever owned or the stupid backblaze report any real storage expert laughs about.

when you look at RMA rates from retailers seagate don´t do worse than other brands.
in fact they often have half the RMA rate of western digital drives (this depends on models of course).
some models are wose than others. there can always be a model with a series issue like the "click of death". the 1.5TB seagate was not a good drive, but other brands have such bad models too.
a big french retailer often makes such RMA numbers public.

the backblaze reports was debunked by people who really have a clue about harddrive storage. people who don´t buy cheap refurbished drives that are not meant to be used in vibration intensive server farms and then publish a stupid report.

they also write somewhere in their first report that they used repaired drives too.
because during 2011 (and because of the thailand flood) they could not get enough new drives.

how many of the repaired drives are seagate, how many HGST and WD?
you get no info at all about that.


i don´t know if they changed it in their second report from 2016 (i did not bother to read all of it).
the main problem with the first blackblaze study is the lack of background info they provide.

the 1.5 TB seagate is the oldest drive.

if you do statistics, at least provide standard deviation.

what about the actual average throughput before failure?

you see putting out numbers and a bar graph, without some context, makes no real sense.

for some time a french retailer made his RMA rates public published in a french print magazine (don´t know if he still does).
the RMA rates for 2 different years:

these reports don´t tell you how many units of each model are sold.
but it shows how different such reports can be.

what people tell you about their experience with harddrives is no way to measure HDD (or brand) reliability.

now i use WD and HGST too.
i can´t really say one brand is better than the other when it comes to reliability.


and these infamous backblaze reports get posted and copy and pasted on every blogger website without any digging into it.Quote

AlienALX
Every HDD maker ever has had a few bad drives. When I used to run the shop the Samsung returns were off the charts. Hitachi made the Deathstar and so on. I also had a couple of Maxtor that were bad from the off. Fine until you wrote over 14gb to them (they were 20gb) and then they would die and you would lose all of your data.Quote
Reply