Can Seagate HAMR the competition?

Seagate's HDD roadmaps clearly show that the HDD is far from dead, promising to deliver a 48TB HDD in 2023, a leap of over 3.4x when compared to today's 14TB HDDs from the company.

Thanks to the addition of HAMR technology, Heat Assisted Magnetic Recording, Seagate plans to double storage densities every 30 months (2.5 years), making a 100TB HDD possible in 2025/2026. This technology will increase the density of HDDs enough to make them more competitive within today's data-centric storage market.

Western Digital, another major name in the HDD space, plans to back their Microwave-Assisted Magnetic Recording technology as an alternative to HAMR-based drives, claiming that their technology will increase HDD longevity while offering similar storage density benefits. 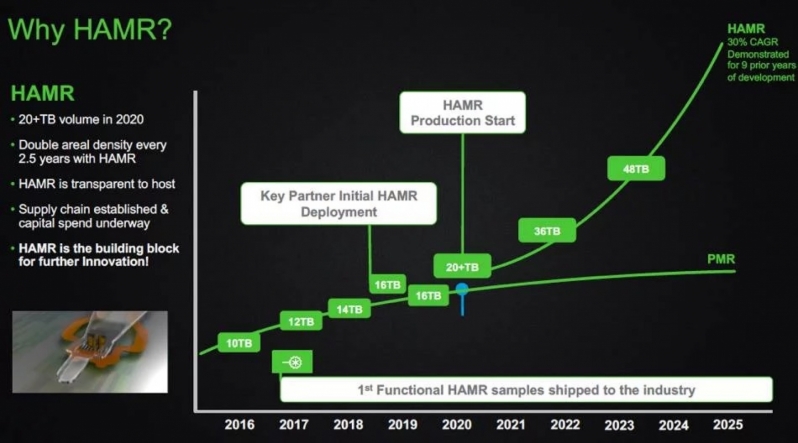 Alongside their HAMR-based HDDs, Seagate also plans to launch drives with Multi-Actuator technology, allowing their future drives to offer increased performance levels (IOPS) by utilising several independent actuators, which will parallelise their future drives to deliver increased read/write performance. This technology should allow IOPS/TB metrics to remain the same as today's drives, despite the increase capacities provided by HAMR.

You can learn more about Seagate' MACH.2 Multi-Actuator technology on here.

The introduction of HAMR and its competing technologies will deliver an upheaval of the traditional HDD industry, allowing drive capacities to skyrocket while also allowing the cost/GB of mechanical drives to plummet in the years following its introduction. HDDs are about to get a lot bigger.

You can join the discussion on Seagate's HAMR technology delivering HDDs as large as 100TB by 2026 on the OC3D Forums.

NeverBackDown
We complain about price/GB now.. can't even imagine what it will be like for data center markets

g0ggles1994
Honestly, this is a great step forward in HDD technology but my only concern is reliability since gigantic drives like this would only be [logically] used for data centers and archivingQuote

tgrech
HDD reliability is only really an issue of running costs for most data centres of any sort. Drives are expected to fail so there's generally several layers of redundancy (Most larger places will generally try to keep data on at least a couple of different geographical locations incase of a major incident at one location).

If a drive sacrifices say 10% of it's running time/reliability for a 20% increase in price/GB and density then it's worthwhile, if it's the other way round(Or equal really given the costs associated with more frequent maintenance) it's not, but that's about as far as the real world effects go.Quote

Avet
Quote:
Additional benefit is also rack space. If you can run same capacity server in 3x less space it does lower running costs significantly (the main selling point for Nvidia Tesla servers over conventional ones). Will it equal out with reliability/cost per GB remains to be seen.Quote
Reply