Samsung is one of the world leaders in SSD technology, producing their own NAND, controllers and firmware to create an ecosystem that is almost unrivalled. The enterprise SSD market demands the best, both in terms of capacity and reliability, making high capacity SSDs from a world-renowned brand a highly sought after commodity.

This demand makes the creation of high capacity SSDs a must for all major SSD manufacturers, as this allows larger banks of storage to be connected to connected to a single server. The PM1643 is Samsung's answer to the storage demands of the high-end enterprise market, offering capacities of up to 30.72TB and several industry firsts when it comes to SSD tech.

Samsung has doubled the capacity of their previous 15.36TB enterprise models, utilising their latest 64-layer 512Gb TLC NAND chips in 16-layer stacks to create 1TB NAND packages. These packages are claimed to be the industry's first 1TB NAND packages, with 32 of these new dies shipping together to crease their latest 32.72TB SSD. In the consumer space, 1TB full SSDs are fairly rare, nevermind single chip packages with the same amount of storage.

The PM1643 utilises the 12Gb/s SCSI (SAS) interface to deliver read and write speed so up to 2,100MB/s and 1,700MB/s respectively, with random read/write speeds of 400,000 and 50,000 IOPS. The PM1643 will also utilise a new controller design from Samsung, as well as custom firmware, which helps to improve the performance and reliability of the unit.

Samsung has utilised their manufacturing technology to integrate nine controllers into a single package, greatly reducing the area that is used by this component while also stacking ten 4GB DRAM packages with Through Silicon Via (TSV) technology to bring 40GB of DRAM storage into the SSD. This is the first time that TSV stacked DRAM has been used in an SSD. 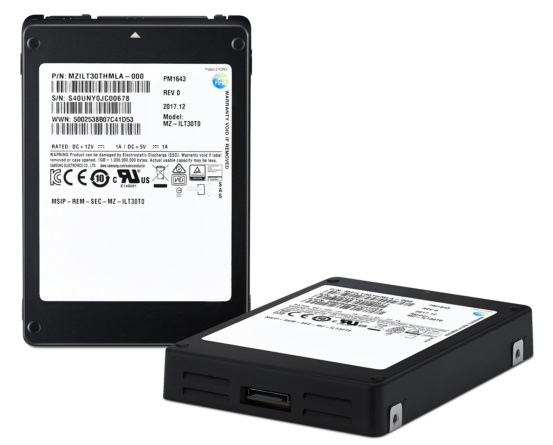 Samsung offers a five-year warranty with this SSD with up to 1 DWPD (Drive Write Per Day) of endurance, allowing 30.72TB of data to be written to the drive for every day of its five-year warranty. The PM1643 is also said to offer a mean time between failure of two million hours.

You can join the discussion on Samsung's new 30.72TB Enterprise-grade SSDs on the OC3D Forums.

ImprovizoR
It would be so freakin' awesome to have one of these.Quote

RobM
Would also be awesome if they were cheaperQuote

BigDaddyKong
I would love to have 4 of these in my server. I imagine the price will be 14K-16K each to start with. A little more than I want to spend on a home server.

I hope they do a little better with the warranty on the consumer model.Quote

Emu
Quote:
The consumer warranty on the 960 Evos is 400 times the capacity of the drive in drive writes or 3 years. That is pretty good. My system drive (a Crucial MX300 275G

has 9.2TB written in the 16 months that I have had it. Using the Samsung warranty formula, I have used up ~9% of the Total Bytes Written (TBW) in 1 and a third years which would leave me at using up ~21% of the TBW after 3 years at the current rate of writes. My two 500GB Samsung 840 Evos have 9.4 TB and 7.4 TB of total writes over their much longer lifespan but only one of them has ever been used as a system drive.

If that really concerns you then you could go with the Pro versions which double the TBW to 800x the capacity of the drive or 5 years.Quote
Reply