Does Samsung has a PCIe 5.0 SSD on the horizon?

It looks like Samsung's preparing to launch a new PCIe 5.0 SSD

Samsung has just submitted two new SSD designs to the Korean RRA, models that are likely to be 1TB and 2TB versions of their next-generation 990 PRO SSD.

Today's PCIe 4.0 SSDs can deliver sequential read speeds of over 7,000 MB/s, and new PCIe 5.0 SSDs should be able to deliver speeds that are up to two times faster than that. Samsung has already created a 13 GB/s PCIe 5.0 SSD with their PM1743 series of enterprise storage solutions, and faster speeds could be possible with Samsung's next-generation SSD models. 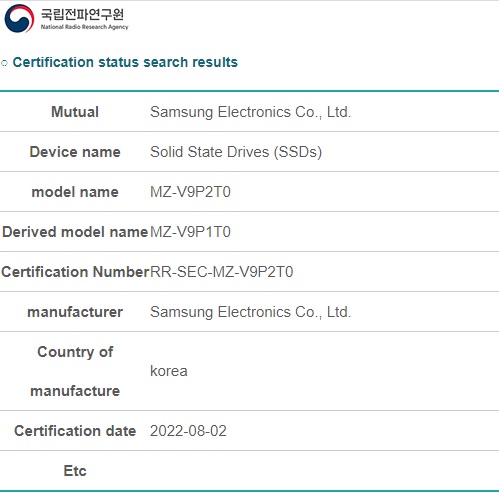 If Samsung are ready, the company may reveal their PCIe 5.0 990 PRO SSD alongside new PCIe 5.0 compatible motherboard designs from Intel and AMD later this year, riding the momentum of Intel's Raptor Lake CPUs and AMD's Zen 4 Ryzen 7000 series platform. Alternatively, Samsung could reveal their 990 PRO SSD at CES in early 2023.

You can join the discussion on Samsung's planned 990 PRO SSD on the OC3D Forums.

Dicehunter
Useful for enterprise solutions but it would be nice if games made use of our hardware properly, GPU's and CPU's are very inefficiently used and the 7GB/s NVME's we currently have are barely touched making them only slightly faster for loading than a SATA based SSD.Quote

NeverBackDown
Quote:
Takes time. The ability hasn't been around that long outside of consoles and even then not long.